The Rebirthing of God Christianity's Struggle for New Beginnings

By John Philip Newell
A presentation of eight features for a renewal of Christianity plus the guides who can show us how.

John Philip Newell is an internationally acclaimed teacher, retreat leader, and speaker who has written many books including A New Harmony: The Spirit, the Earth & the Human Soul. Formerly warden of Iona Abbey in the Western Isles of Scotland, he is now companion theologian for the American Spirituality Center of Casa del Sol at Ghost Ranch in New Mexico and the co-founder of Heartbeat: A Journey Towards Earth's Wellbeing.

In the introduction to this hopeful work, Newell asks Christians of all stripes to "dream together of a reborn Christianity that might again carry great blessing for the world and usher in the emergence of a new well-being for the earth." In essence, this adventure is animated by "a radical reemergence of the Divine from deep within us."

The rebirthing of Christianity in our time has eight major features:

1. Coming back into an intimate relationship with the sacredness of the earth.
2. Focusing on compassion as the courage to see, to feel, and to act.
3. Exploring the discipline of looking for the light at the heart of all life.
4. Reverently approaching the heart of other traditions and learning from them.
5. Tapping into the spiritual practices of contemplation and meditation.
6. Reclaiming nonviolence as an essential feature of rebirthing.
7. Making the most of the worlds of dreams, intuition, and mythology
8. Committing to love as the hub of the new birth in our lives and in the world.

Newell points out that as we make our way through the wilderness, we need guides or scouts to show us the right way. The first modern prophet of the sacredness of the universe is Pierre Teilhard de Chardin (1881-1955) who said "the more I give myself to the earth, the more I belong to God." Newell also salutes Thomas Berry (1914-2009) as the first Christian prophet of the protection of the earth. He said: "We need to move from a spirituality of alienation from the natural world to a spirituality of intimacy with the natural world." 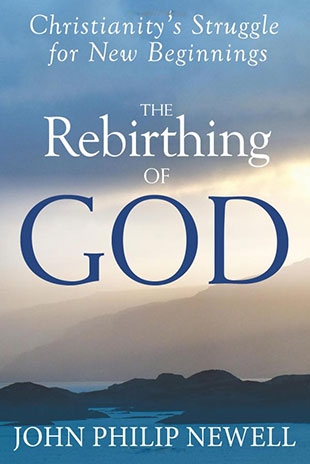