The Legend of Saint Nicholas

By Anselm Grun
A simple and elegant account of the life and ministry of Saint Nicholas.

Anselm Grun is a Benedictine monk who has written approximately 300 books that have been translated into 30 languages. He has taken the legends surrounding the life and ministry of St. Nicholas and patched them together in this children's picture book for boys and girls 4 through 8 years old. The paintings by Guiliano Ferri add immensely to the book.

Not long after becoming a priest, Nicholas used money inherited from his rich parents to save three girls who were going to be sold into slavery. God paved the way for him to become Bishop of Myra, and Nicholas's amazing feats at sea resulted in him becoming the patron saint of sailors. Then when a famine came to the area, he single-handedly turned things around for the community. It seems that his parents did well to name him Nicholas. which means "Victory of the People."

On the last pages of this book, we learn that December 6 is his feast day and that around the world, children leave their shoes or an empty plate in hopes that Saint Nicholas will leave something for them. 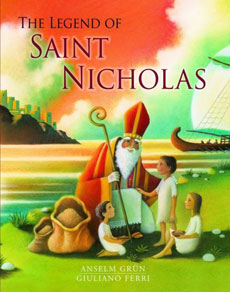