Second Wind Navigating the Passage to a Slower, Deeper, and More Connected Life

By Bill Thomas
An enthusiastic vision of the adventures which lie ahead for elders.

Demographers used the analogy of a "pig inside the python" to convey the immense impact of the Baby Boom Generation, but this large cohort was not unified in their actions or priorities. Dr. Bill Thomas, a visionary and internationally recognized expert on aging, divides this postwar generation into three groups: Squares, Activists, and Hippies. After setting off a deluge of shocks to traditional values and culture, the Baby Boomers created a cult of adulthood with an emphasis upon efficiency, performance, and success.

Thomas points out the importance of Stephen Covey's Seven Habits and Ayn Rand's Objectivist Ethics as laying the groundwork for the Boomers' emphasis on individuality and a denigration of collective action in the pursuit of the common good. This philosophy, according to the author, has reigned for over 40 years. But now we are entering an era where adulthood is giving way to elderhood. And the Baby Boomers and others are responding in three ways: (1) the deniers want to look and act younger than they are, (2) the realists are willing to go with the flow, and (3) the enthusiasts are excited to be the pioneers of this adventure.

Thomas sees American culture as reeling from all the emphasis on doing and competing. Life is out of balance — a stage of life which Native Americans called "Koyaanisqalsi." Elderhood offers us a chance to rectify this situation, to live a "slower, deeper, and more connected life." In place of the youthquake of the 1960s and 1970s, we have the Spiritual Eldering movement established by the late Rebbe Zalman Schachter-Shalomi with its emphasis on legacy and working to collaborate with other generations in creating a sustainable earth. In Second Wind, we see all the wild possibilities which can come from a hundred different eldertopias. 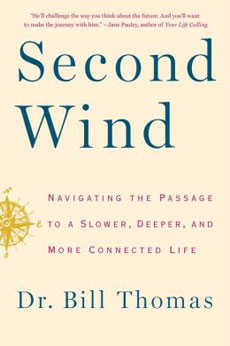