By Deepak Chopra
A defense of God against spiritual nihilism.

Deepak Chopra is one of the most prolific and media savvy spiritual teachers in the world. His unique blend of faith includes ancient Vedanta philosophy, the modern worldview of quantum physics, and New Age nuggets gleaned from Perennial perspectives. The scope of his vision of life-adventures is quite broad; all you have to do is peruse the 80 titles at the beginning of this unusual book.

It is rather mind-blowing that someone of Chopra's experience and fame would think it necessary to write a defense of his faith by responding to the aggressive rhetoric and materialist arguments of Richard Dawkins. Although Dawkins does not call himself a militant atheist, he has certainly drawn out the ire and the passion of those who believe in God, faith, and the virtues of religion. Chopra's book has been preceded by Francis Spufford's Unapologetic: Why, Despite Everything, Christianity Can Still Make Surprising Emotional Sense, Karen Armstrong's Fields of Blood: Religion and the History of Violence, and countless articles defending religion against Dawkins.

Chopra addresses the spiritual nihilism of Americans who call themselves atheists with the words: "Faith must be saved for everyone's sake. From faith springs a passion for the eternal, which is even stronger than love . . . The path is never closed, however. If faith can be saved, the result will be an increase in hope. By itself, faith can't deliver God, but it does something more timely: It makes God possible."

In chapters on the raising of one's consciousness, miracles, and hints from the subtle world, Chopra paves the way to seven ways (one for each day of the week) to get aligned with your inner world. This spirituality goes beyond conventional religion which has been attacked by Dawkins and company. Just when we are easing into his reasons why faith is worthwhile, Chopra returns with a final attack on the "ten flaws in the Dawkins Delusion." By joining the religious wars, Chopra loses some of his own energy.

God does have a future but it never comes through churlish arguments or slams on the ideas of others. Instead the Spirit opens our hearts and minds to experience the great mysteries which give us light and hope whether we are seeking a new path or looking for peace in a pew. 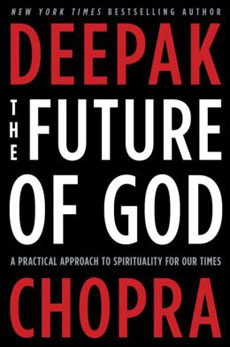