Antoinette Bosco is an award-winning journalist, columnist, and author of The Pummeled Heart: Finding Peace Through Pain. In August 1993, her son and daughter-in-law were murdered in their Montana home. When the killer was caught, Bosco was overcome by rage, desiring only his death. Then this Catholic laywoman realized: "If I didn't forgive Shadow Clark, I would be emotionally handcuffed to him, bound to him in a destructive way. Jesus said that he had come 'to set us free,' and he showed us the way. In a word — forgiveness. It was a contradictory path for his times, and has remained so in our time."

In this extraordinary volume, Bosco presents her opposition to the death penalty. According to her statistics, over 3,000 people are currently on death row and more than 675 persons have been killed in the past 24 years — some surely innocent — by legally sanctioned gassings, electrocutions, hangings, lethal injections, or firing squad bullets. Bosco argues that capital punishment is not a demonstrated deterrent to violent crimes; it is subject to error by judges and jurors; and that "any society that sanctions official vengeance may be setting an example of the brutal devaluation of life that it wants to deter."

The author speaks out boldly to challenge survivors of homicide victims who proclaim their right to hate and their need to experience "closure" by seeing murderers executed. In place of solving problems through state sanctioned violence, Bosco advocates the countercultural stance of Jesus who "spoke firmly and consistently about our need to forgive, of overcoming evil with good, and of putting away the sword so that we would not perish from weapons of destruction."

The author's vision of a humane and compassionate society is a salutary one that demands a hearing. Bosco asserts: "The death penalty puts us on the edge of a sword. The uncertainty, confusion, and anguish it generates offer strong testimony that the death penalty may be the most wrenching moral dilemma of our time. For the issue can't really be dealt with from our human perspective, but only through finding our higher selves." 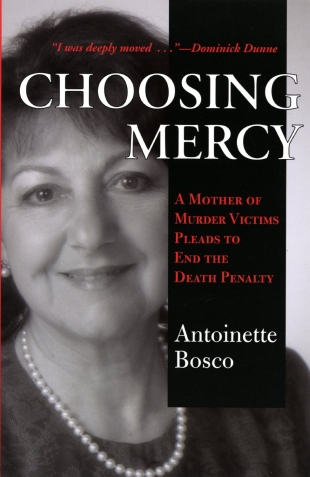