By Lama Surya Das
A practice-grounded book from the Tibetan Buddhist teacher on inter-meditation in everyday life as a way to achieve oneness.

Lama Surya Das is one of the foremost Western Buddhist meditation teachers and scholars, one of the main interpreters of Tibetan Buddhism in the West, and a leading spokesperson for the emerging American Buddhism. The Dalai Lama calls him "The Western Lama." The founder and spiritual director of the Dzogchen Foundation in Massachusetts and California, he has written many books and is also a poet, translator, and social activist. He is profiled in S&P's Living Spiritual Teachers Project.

The impulses toward individualism, self-growth, and separation are very strong in America. In this prophetic work, Lama Surya Das presents an alternative which he calls "inter-meditation" whereby the emphasis is on the practice of "convergence, connection, co-meditation and spontaneous oneness." It is, he explains, a "path we can take to overcome our illusions of duality."

Inter-meditation takes us from the meditation pillow out into our everyday world where every aspect of our lives becomes part of our spiritual journey. It is the antithesis of "navel-gazing and narcissism, or religion-as-escape, yoga-as-commodity, spirituality-as-a-vacation." In order to illustrate just what this means, Lama Surya Das turns to a rich and full explanation of befriending ourselves through attention (nowness awareness), self-compassion, and authentic connection. These three practices provide the foundation of inter-meditation.

Throughout this paperback, the author demonstrates how important it is for Buddhists to be open to neurology and other sciences, critical thinking, and the kind of social engagement that arises out of the major ethical issues of our times. In a chapter on the importance of spiritual teachers, Lama Surya Das presents a practice he calls "Co-meditating with the Dalai Lama" which includes visualizing him, absorbing the flow of spiritual transmission and timeless wisdom, and letting him breathe through you.

Other inter-meditation practices which can be found here involve accessing Big Mind; working with illness, the dying, and the dead; noble-silent nature walks; hugging as a nowness exercise; sky-gazing; working with an equanimity mantra; and using practices to dissipate conflict in a variety of relationships. Certainly the most fascinating subject the author examines is "a passion for oneness" in the Tantra of Co-Spirituality.

When it comes to sex, Lama Surya Das reminds us of the Lojong aphorism: "Happiness comes from putting others first, thinking of them before oneself. Unhappiness comes from preoccupation with one's own happiness and satisfaction." What takes place in the bedroom with intention becomes a path and a dance of awakening where we learn there's more to passion than just sex.

According to the author, all of our connections and interactions with others are meaningful with many lessons to be learned from them. Here you will be enlightened with inter-meditations on wishing others well (WOW); letting go; standing in the Other's shoes; the six R's of Intentional Responsiveness; and having our enemies teach us about reality.

In addition to explorations of lojong (mind training) and tonglen, Lama Surya Das makes the most of his playful side with commentaries on a practice called "The Emily Dickenson Way," and one he describes as "Graveyard Sauntering." These examples of lightness are appreciated given the daunting problems facing us in our times.

Lama Surya Das reminds us to take all these inter-practices seriously since we are the ancestors of generations to come. He ends with these wise words:

"I believe strongly that we need to see beyond our small selves--beyond selfishness, short-term self-interest, and the separationist mentality-and learn to identify with our whole world."

Be sure to read the excerpts where Lama Surya Dass lists "Ten Keys to Inter-Meditation" and "Thirty-Three Potent Aphorisms" that sum up his vision of things. 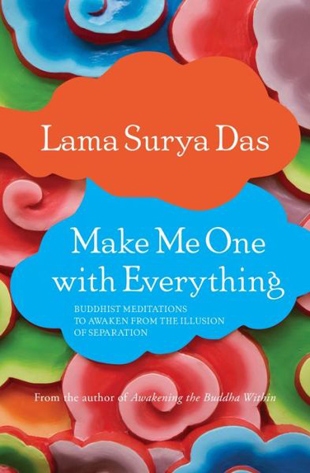