A God That Could Be Real Spirituality, Science, and the Future of Our Planet

By Nancy Ellen Abrams
An atheist's spiritual journey to discover the practical dimensions of the Divine.

Nancy Ellen Abrams is a philosopher, lawyer, and lifelong atheist. She has written two books with her husband Joel Primack, a well-respected astrophysicist whose work has stirred dialogue about a universe based on dark matter and dark energy. As she made her contributions to their books, Abrams asked the question: Could anything actually exist in this strange new universe that is worthy of the name "God"?

After two glowing affirmations of the importance of A God That Could Be Real by Archbishop Desmond Tutu and Paul Davies, the world-renowned astrophysicist and cosmologist, the author points out that this volume had its origins in her personal quest for a higher power that could free her from food addiction. This admission reveals the practical dimensions of the human search for the Divine.

Abrams revels in the fact that we live in an expanding universe where everything is moving. What is real evolves including our images of God. It is time to move beyond the debates between fundamentalists and atheists to "understand God in a way that serves us in the world we actually live in." We now have a chance to do what those who came before us never achieved: "take a creative, active role in the evolution of God."

Abrams ponders evolution, science, and reason before coming up with the following: "God is endlessly emerging from the staggering complexity of all humanity's aspirations across time." God does not live in the sky but resides right here on Earth. In a series of thought-provoking passages, the author considers the meaning of our God-capacity, prayer, an afterlife, and becoming an ancestor.

In a chapter on "Renewing God, Renewing Religion," Abrams identifies four daring things that will achieve that goal:

1. Break the spiritual glass ceiling.
2. Reject literalism.
3. Find the "truth box"
4. Honor the sacred to everyone. 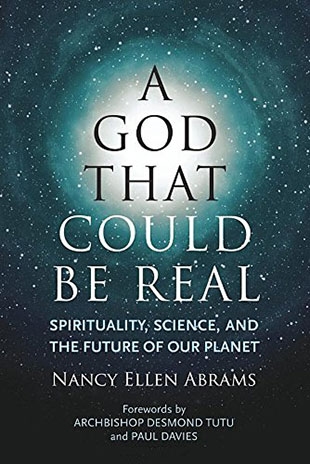