October 31, 1517 Martin Luther and the Day That Changed the World

By Martin E. Marty
Luther's call for repentance and justification by faith.

On October 31, 1517, Martin Luther, angry and disappointed with the corruption of the wealthy Catholic church, nailed on the door of Castle Church in Wittenberg, Germany, 95 theses calling for a Reformation. This momentous moment in Christian history is captured and assessed by Martin E. Marty, the Fairfax M. Cone Distinguished Service Professor Emeritus at the University of Chicago, where he taught for 35 years. The author of more than 60 books, he has participated in Christian ecumenical programs and is, according to Catholic theologian James Martin in the foreword, "a peerless scholar and superb writer."

The central point of Luther's bold act of protest was a call for repentance or a change of heart within the Catholic Church which at the time was overrun with corruption due to the selling of indulgences. Instead, Luther emphasized justification by faith and an acceptance of the grace of God.

Marty mentions that in 1983, the 500th anniversary of Luther's birth, there was talk that more books in the Western world had been written about this reformer than anyone else except Abraham Lincoln and Napoleon. Other interesting topics covered in the book are the present day existence of some 40,000 Christian denominations (part of Luther's legacy), the continuing dialogue between Lutherans and Catholics, and their sincere efforts to come together in common prayer and joint action. 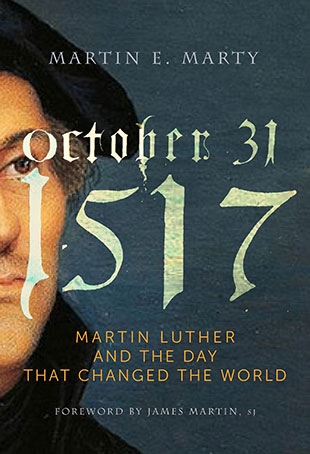