Lex Hixon (1942 - 1995) was a trailblazer on the path of interspirituality. He received his Ph.D. in world religions from Columbia University, embraced several religious traditions, and led a Sufi order in New York City. He wrote nine books including Coming Home in which he explored the interplay of the spiritual traditions on the central theme of enlightenment. Ken Wilber called it "the single best introductory book ever written on the world's great mystical traditions."

We can better understand the breadth and depth of that book after reading the interviews in Conversations in the Spirit. For 13 years, Hixon hosted the "In the Spirit" program on New York radio station WBAI. He interviewed the spiritual movers and the shakers of the 1970s and 80s. His wife Sheila shared these soulful expeditions with him and after his death maintained the archives from the radio program. She has now edited the interviews following his outline to create the book he wanted to publish.

At the core of Hixon's work at the crossroads is his hospitality to the vitalities and visions of all religious traditions. Or as he once wrote: "Spiritual longing should be accompanied by sympathetic yet critical intelligence that continually reorients us to the most compassionate ethical values and the most comprehensive practice of contemplation." Again and again, he models for us this kind of sensitivity marked by a yearning for unity.

We have been waiting for these gems to appear for years and are very thankful to Sheila Hixon for passing them on to us. It is a sheer delight to witness the early stages of a spiritual renaissance that has made the world and religion quite different in our times. 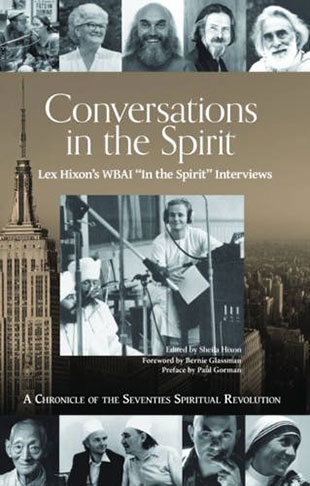