By Dzongsar Jamyang Khyentse
A balanced view of gurus who both wrestle with demons and dispense epiphanies.

Dzongsar Jamyang Khyentse is a Bhutanese lama, filmmaker, and author of the bestselling book What Makes You Not a Buddhist. He writes on the opening page:

"Guru devotion is the head, heart, blood, spine, and breath of the incredible Vajrayana, the path of Buddhist tantra. The Vajayana is not a safe stroll in the countryside. In fact, safety is probably the least of our concerns. The Vajayana's way of dealing with ego and the emotions is hazardous. The methods are sometimes even reckless. Therefore, the tantric path is the most adventurous of all Buddhist paths."

Given human nature, following a guru is not an easy thing. Khyentse says that the guru is like the horizon — a line where earth and sky seem to meet. This spiritual teacher is many things to his/her disciples or devotees: a teacher who enlightens, a preceptor, someone who leads, a master at teaching mind control, and an exemplar of the Buddhist practice.

Outsiders who tend to be skeptical of attaching themselves to a guru point to the addictions of the famous Tibetan Buddhist teacher Chögyam Trungpa. Khyentse presents a good guru checklist, emphasizing the character qualities of respected teachers such as open-minded, tolerant, learned, humble, generous, gentle, nonjudgmental, and skillful.

The Guru Drinks Bourbon presents a balanced view of gurus who, like all of us, often wrestle with their own demons and dark shadows. He reveals some of the epiphanies and transformations that have resulted from individuals' encounters with gurus. 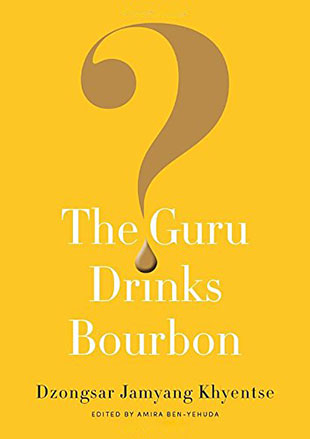