White Trash The 400-Year Untold History of Class in America

By Nancy Isenberg
An engrossing historical work on the strange and long-lasting presence of class in American democracy.

"Throughout its history, the United States has always had a class system. It is not only directed by the top 1 percent and supported by a contented middle class. We can no longer ignore the stagnant, expendable bottom layers of society in explaining the national identity. The poor, the waste, the rubbish, as they are variously labeled, have stood front and center during America's most formative political contests." So writes Nancy Isenberg, the T. Henry Williams Professor of American History at Louisiana State University and author of Fallen Founder: The Life of Aaron Burr, which won the Oklahoma Book Award for best book in nonfiction.

The scourge of racial prejudice and hatred in America has been explored and examined from many different angles. With this substantive and wide-ranging book, Isenberg expands the focus to take a long and hard look at America's class system from colonial times to the present day. Along the way, she shatters the argument that liberty and hard work make it possible for the poor and the downtrodden to reap the benefits and pleasures of upward social mobility.

Polishing her command of history, sociology, economics, psychology, and popular culture, Isenberg starts with the caste system brought to the New World by British colonists who treated poor whites as slaves and shamefully categorized them as "Waste people. Offscourings. Lubbers. Bogtrotters. Rascals. Rubbish. Squatters. Crackers and more." One only has to scan the language and behavior of George Washington and Thomas Jefferson who both spoke freely about poor whites as the lower class of people

After the Civil War, poor whites remained stagnant individuals while hard-working blacks moved economically ahead of them. To supplement her accounts of the plight of those regarded as white trash, Isenberg offers a colorful and perceptive survey of popular culture portraits of them: the 1960s sitcoms such as Gomer Pyle, U.S.M.C. and The Beverly Hillbillies, Harper Lee's thought-provoking novel To Kill a Mockingbird, James Dickey's violent novel Deliverance, and the more recent TV reality shows Here Comes Honey Boo Boo and Duck Dynasty. Some media celebrities who are associated with this class are Tammy Faye Baker, Sarah Palin, and Dolly Parton.

White Trash is a strange and engrossing historical study of the long life of class in a democratic society where social mobility has traditional been held as a bedrock truth, yet rarely achieved. 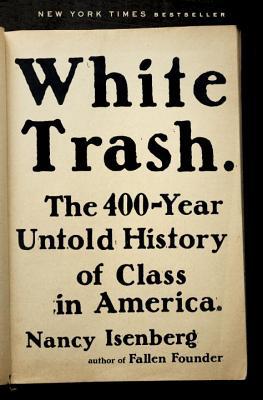