By Mark Gerzon
An incredibly timely and relevant vision of democracy.

In a 2014 Pew Research poll, seven out of ten Americans blamed our problems on the inability of elected officials to act effectively. When asked which of our society's moral virtues have declined most "respect for others" scored highest. These polls reveal the vast and widespread disappointment and cynicism brought on by the partisan divide and Washington gridlock.

In this wise and incredibly relevant resource, Mark Gerzon, president of Mediators Foundation, presents his vision of citizenship based on connections rather than division, bridges rather than walls, and using common ground as a gateway to political action. With many years of experience in cross-partisan work, collaborative governance, and "a new patriotism," this multi-talented activist has proven to be a gifted scout surveying the land ahead of us and bringing back to camp fresh ideas on transpartisanship.

Gerzon agrees with Albert Einstein who once noted: "In the middle of difficulty lies opportunity," and so he believes we can make the most of this crisis period for American democracy. He suggests we throw out simplistic knee-jerk explanations of where we are and set aside our notions of control, adversarial talk, and blaming the other party for the sad state of affairs in the country. He challenges us to find a safe place for dialogue and to work together with others in a search for common ground.

The author has high regard for openness and sees it as a solid and substantive virtue in all conversations about hot-button issues such as immigration, health care, debt reduction, abortion, gun policy, and education reform. Gerzon laments the fact that most schools have dropped civics courses and as a result, youth are often lacking in knowledge regarding creative governance. This can result in them becoming easy prey to spin and half-truths.

In the opening pages of the book, Gerzon presents the yearnings of many of those who have attended his workshops about bridging the partisan divides:

"We want to feel safe in our country. We want to have confidence in our future. We want to learn how to deal more constructively with the differences that are splitting us apart. We want our leaders to work together to solve problems and strengthen our country."

If you can identify with these yearnings, you will — like us — be excited and moved by this top-drawer call to the reformation of democracy! 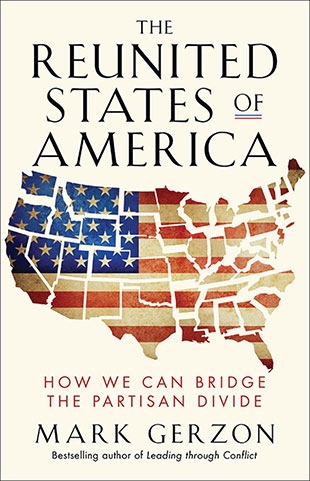