Happier? The History of a Cultural Movement That Aspired to Transform America

By Daniel Horowitz
An astonishing work of cultural analysis on changes in the field of psychology.

Daniel Horowitz is the Mary Huggins Gamble Foundation Chair and Professor of American Studies Emeritus at Smith College. He is an historian whose work has focused on the history of consumer culture and social criticism in the United States during the twentieth century. Among his publications are a biography of Betty Friedan and three books on how American and European writers from the 1830s to the late twentieth century wrestled with the consequences of affluence.

In this astonishing work of cultural analysis, Horowitz delves into the shift of focus in psychology from mental illness to happiness. He describes the rise of happiness studies in the 1960s and positive psychology in the 1990s. Martin Seligman was the central figure in the latter movement. "Positive psychology called to me," he remarked in 2001, "just as the burning bush called to Moses."

Other fascinating explorations center around Norman Vincent Peale and the The Power of Positive Thinking, the question as to whether or not money can buy happiness, the pleasure of flow, and better living through relaxation. 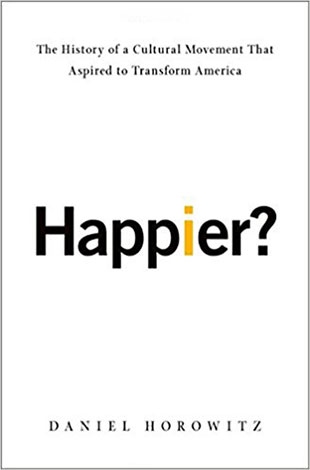