One Kiss or Two? The Art and Science of Saying Hello

By Andy Scott
A cross-cultural exploration of the meaning and impact of greeting rituals.

In today's world of complicated social interactions, even the seemingly simple ritual of saying hello is fraught with anxiety, doubt, and fears of failure. Andy Scott has greeted people in more than 60 countries and served as a British diplomat in Libya and Sudan. In this smart and sassy book, he examines in detail the origin and evolution of greetings, identifying cultural differences in manners and etiquette. He gives us a wide-ranging look at the subject via body language, evolution, neuroscience, psychology, anthropology, and history.

The Oxford English Dictionary defines a greeting as "a polite word or sign of welcome or recognition: the act of giving a sign of welcome; a formal expression of goodwill, said on meeting or in a written message." Those who are nervous about greetings can always revert to "weather talk" or the kind of conversation characterized as "bridging talk."

The greeting habits of people from other countries than our own can sometimes take us aback. The average American who greets someone with a hug may seem too emotional to the French who have an aversion to hugs. The British are known for being a bit more reserved in the presence of strangers. Central Eskimos greet outsiders by slapping them in the face; meanwhile, other members of the community sing and play.

Scott reports on University of Manchester psychologist Geoff Beattie's research to define the prefect handshake. It turned out to have 12 elements including completeness of grip, smile, dryness of hand, vigor, control, and duration.

With immigrants pouring into countries, many residents prefer to say hello to no one unless they know them. Scott recalls the very funny scene in the movie Crocodile Dundee when Mick Dundee, fresh out of the Australian outback walks down a street in New York City saying 'G'day' to everyone, only to be looked at like he's a nutcase.

On the other hand, there is the Indian spiritual teacher Amma (meaning Mother) who is known as the "Hugging Saint." It is estimated that she has given over 14 million hugs to people around the world. We enjoyed One Kiss or Two and took away so much information and insights from it that we hope Andy Scott will do a sequel on "Goodbyes." 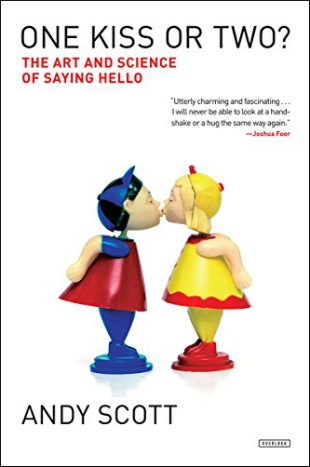