The Rich and the Rest of Us A Poverty Manifesto

By Tavis Smiley, Cornel West
A challenge to change America's dialogue on race and justice to include concern for the poor.

In 2011 broadcaster, author, and philanthropist Tavis Smiley and educator and philosopher Cornel West launched their own weekly program from Public Radio International and then embarked on "The Poverty Tour: A Call to Conscience," an 18-city bus tour designed to spotlight the plight of the poor and to move poverty to the forefront of the American consciousness. They pay tribute to Dr. Martin Luther King, Jr. , for spurring their commitment to changing America's dialogue on race and justice. They point out that his final mission was to stand by the 1,300 sanitation workers in Memphis who were seeking better wages, bargaining rights, and safer working environments.

Smiley and West make a direct appeal for "your help as we attempt to unsettle, unnerve, and unseat the powers that deny and downplay the rights of the poor people in this nation and in the world. We're not Dr. King — or even trying to be — but we do believe that the very future of this democracy is inextricably linked to how seriously we heed this call to care for and concern ourselves with the plight of the poor."

Using statistics and anecdotal details, this dynamic duo challenge us to do whatever we can to support work for the unemployed and the underemployed who along with an increasing number of children comprise the 150 million citizens living below the poverty level. 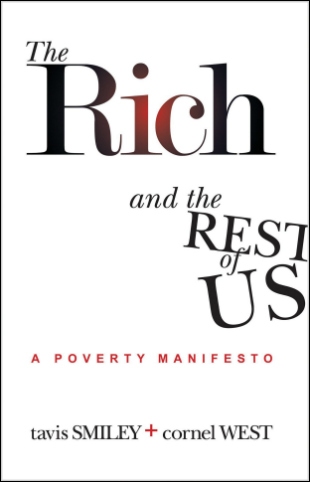