The Art of Mystery The Search for Questions

By Maud Casey
An elegant analysis of fiction and other art forms that probe mystery and stimulate our wonder and imagination.

This fascinating journey through fiction — with visual arts and film adding further intrigue — takes the reader into what Maud Casey calls "the land of Un — uncertainty, unfathomability, unknowing." The depth and breadth that she covers in her eight haunting chapters is itself uncanny. She offers her interpretation from authors "whose fiction undoes me": Flannery O'Connor, James Baldwin, Shirley Jackson, Paul Yoon, J.M. Coetzee, and others. She admits, though, that her consideration could never be comprehensive: "Mystery in literature, as in life, expresses itself in infinite ways."

So many readers are starved for wonder and, to meet this need, turn to mysteries. Mysteries draw us into secrets and even deceptions in which we willingly participate. As an example, Casey tells the story of Edouard Buguet, who in 1873 took photos in Paris of people to whom spirits of deceased relatives were ostensibly appearing. Eventually the police raided his studio and discovered reams of evidence that Buguet had been ingeniously double-exposing his plates with fake dummies and other suggestions of the spirit world. At his trial Buguet admitted the fraud and described in detail how he had accomplished it. Nevertheless, every former Buguet client whom the prosecution brought in listened to his testimony — and then, surprisingly, spoke up in his defense. Casey uses this story to remind us that "we don't turn to fiction for the facts. Fiction offers relief from the facts and that terrible word — closure."

Maud Casey is the author three novels, the recipient of a Guggenheim Fellowship, and a teacher at the University of Maryland. This elegantly written paperback is fourteenth in Graywolf's The Art Of series, which focuses on the craft of writing. The editor of this unique collection of books is Charles Baxter.

Whether writing about empathy, contradictory characters, spirit photography, or the importance of searching for questions rather than answers in fiction, Casey makes a convincing case for mystery stories and other enigmatic works of art as "a whispered invitation, a siren song, a flickering light in the distance." 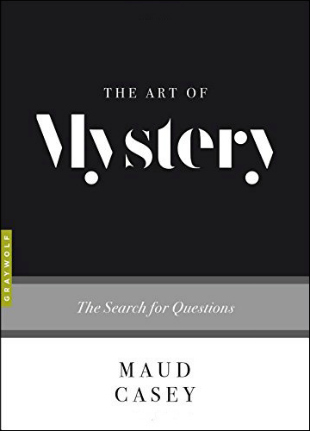