Voices in the Air Poems for Listeners

By Naomi Shihab Nye
95 poems encouraging us to listen to the many sources of wisdom all around us.

Poets like Naomi Shihab Nye have a special gift for lifting up and celebrating the spiritual vitality of gratitude and inspiration. They enable us to feel meaningful connections to freedom fighters, justice seekers, literary figures, musicians, and many ordinary people as well. In this buoyant collection of poems aimed at teen readers, Nye once again demonstrates the tender ties which link us to sensitive souls from the past and those around us today, "all the voices we ever loved or respected in our lives." Her poems in this collection encourage us to listen for their wisdom and encouragement.

In a poem "Gratitude Pillow," she describes how the poet Maya Angelou helped her appreciate the sights of San Francisco:

"And if anyone told her they were going
to Gloomy Street,
she'd say, What? Lift those eyes. Take a look at the
sea to your right, buildings full of mysteries, schools
cracking with joy. open porches.
watch the world whirl by."

Nye is also awed by the cross-country pilgrimages taken by the Peace Pilgrim saluting the ideals of inner and world peace. In a poem titled "Conversation with Grace Paley, Flight of the Mind Writing Workshop, Oregon," Nye concludes that "Politics is simply the way human beings treat one another on earth."

Nye, like most everyone else, admired the astonishing poetry of Mary Oliver. In a clever poem titled "Tell Us All the Gossip You know," she includes several anecdotes about writers, including this one about Oliver's imaginative rituals:

"Mary Oliver wanted to smell flowering pink bushes
and blossoming trees in Texas.
Pull over, she said, at more than one corner. She
needed to absorb the scents.
A city wasn't just a name.
In her presence, babies might sing for the first time.
She is like that."

Here's one about Robert Bly:

"Robert Bly said writing a bad poem before breakfast
every day is a good habit.
He did it in honor of his old friend Bill Stafford
(who also did it) after Bill died.
The poems were never bad, by the way.
They were great.
There were a lot of them.
You could work on them later, after you ate."

Given her young audience for this collection, we were pleased to learn this:

"John Steinbeck
would sharpen
twenty-four pencils every day
and write
till they were
dull."

At the end of this book, Nye presents her own idiosyncratic biographical notes on the voices she has mentioned who have inspired her. Included are Galway Kinnell, Abraham Lincoln, William Stafford, Peter Matthiessen, Freya Stark, Aziz Shihab (her father), Emily Dickinson, Leo Kottke, Coleman Barks, Mark Twain, Chief Joseph, and others.

The 95 poems draw upon many sources of wisdom to move our hearts into fresh paths of hope and personal renewal. 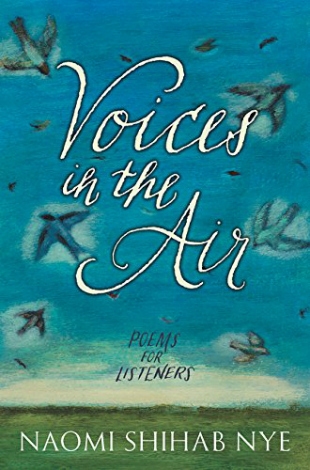 On Being with Krista Tippett Podcast: Your Life is a Poem with Naomi Shihab Nye