A World of Cities

By James Brown
A fascinating celebration of the history, architecture, and character of 30 cities.

This gloriously oversized book (10.9 x 14.8 inches) celebrates the world's most famous cities. Each page spread serves as a combination travel poster and treasure-hunt for fascinating facts.

Open to Athens, and you will see the Parthenon and the goddess Athena, in whose honor it was built. You will learn that Athens has been continuously inhabited for at least 7,000 years; that Athens is the first European city you encounter when you approach from the Middle East; that the city became the first European Capital of Culture in 1985 — and that's only a quarter of the facts that draw you into the city's history and essence.

The knowledge Brown shares goes beyond historical detail. The Cape Town spread, for instance, tells us the story of Nelson Mandela's imprisonment for trying to overthrow the pro-apartheid government and explains that when he was freed in 1990, he called for peace and became South Africa's first black president.

When you go to the Shanghai spread, you are gobsmacked by the skyscrapers that stretch up from the shores of the Yangtze River in this largest city of the world, but you also discover that the city's Jade Buddha Temple houses a Buddha statue that's more than six feet tall, carved from a single piece of jade. So A World of Cities not only gives a world tour, but also a chance to explore some of the best of what the human spirit can achieve.

The book covers thirty cities in all. We won't give them all away, but here's a taste: Prague, which Franz Kafka said "never lets you go"; Rio de Janeiro, where on New Year's Eve people send flower-filled boats out to sea to honor the sea goddess Yemanjá; Delhi, with its impressive Red Fort and a sacred cow — not to mention the world's largest group of eco-friendly buses; Toronto, where more than 160 languages are spoken; and Istanbul, of which Napolean Bonaparte said, "If the Earth were a single state, Istanbul would be its capital."

James Brown was trained as a designer and worked in textiles for ten years before branching out into illustration. You will find yourself immersed in his love of patterns and details as you soak up the pictures with their carefully embedded factual tidbits that appear around each spread's frame, integrated into architecture and silhouettes, and swirling among pictures on ribbons.

This book's designation is for children ages 7-10. But we have been returning to its pages with delight again and again as grown-ups, and we can imagine younger children sitting on someone's lap, looking at pictures and hearing about each city's charms. 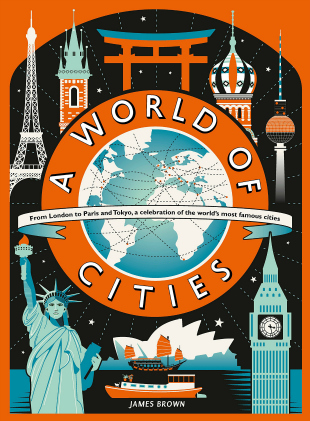