By Alissa Quart
A survey of how financially strapped middle-class families are having to rethink parenting and work.

Middle-class family life in the United States is now 30 percent more expensive than it was 20 years ago. For many, daily expenses have doubled. Because some employers have concluded that women are less productive once they have children and others say they can't afford to cover parents' salaries after the birth of a child, only 13 — 14 percent of Americans have access to paid family leave. Home ownership, once a given for middle-class families, is now out of reach for many of them. Even public universities cost double what they did in 1996, and forty percent of the teachers are adjunct professors who barely make a living wage.

These chilling statistics come from journalist and poet Alissa Quart who is the executive editor of the Economic Hardship Reporting Project. She laments the fates of millions of middle-class families who are experiencing scary financial vulnerability and insecurity, making raising children an overwhelming challenge.

The author assures us that this cohort aren't truly poor, but more realistically are in "the just-making-it group" called "the Middle Precariat." Growing up and believing that they could achieve a comfortable life similar to that of their parents, they are now facing a bleak economic future where work is temporary and their incomes worrisomely insufficient. "They are people on the brink who did everything 'right' and yet the math of their family lives is simply not adding up."

After sharing her own nightmare of downward mobility, Quart writes about lawyers, computer programmers, and engineers who have been told to reinvent themselves for the new job market. Some of these middle-agers have been forced to work as Uber drivers to make ends meet.

And if being decked by the growing cost of living, the disappearanc of jobs to automation, and the burden of paying off debts from college were not trouble enough, members of the cash-strapped middle class also have to cope with the high cost of childcare. Quart makes a good case for policy shifts that will reframe parenting in light of the changing nature of work. 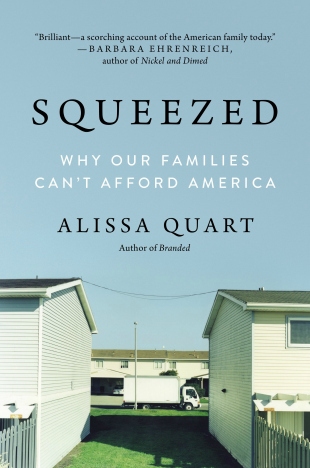