The Song of Spring

By Hendrik Jonas
A cheerful and funny book about a little bird who forgets his song for attracting friends and winds up with a surprising collection of them.

What do you do if all the birds around you are singing their song to attract a special friend, and you've forgotten yours? In Berlin-based writer and illustrator Hendrik Jonas's cheerful and funny book, the forgetful little bird is willing to try just about anything.

One day he tests out "woof," and looks surprised and a bit skeptical when someone wagging, furry, and many times his size comes bounding up toward his branch. The dog stays to support him — and so do subsequent new but mismatched friends — as the bird tests out many of the noises that children in the story's preschool-to-kindergarten age group find delightful: oink, moo, meow (fortunately, this cat seems to have lost its instinct for prey), meh, and hee-haw.

What makes the book so appealing even for grown-ups is that, even with this pattern of accumulating non-avian friends, it does not become formulaic. The dog encourages the bird to have another go, the pig draws a musical chart suggesting "nee-naw," and the cow looks at the bird with wonderstruck eyes when the hapless creature lands on her nose due to shock. The donkey, relaxing uncharacteristically but with aplomb on a branch with his chin on his hoofs, tells the bird, "Well, you sang that [hee-haw] beautifully."

The bird's new friends are all around him, trying to puzzle out what to do, when someone else looking for a friend lets out a deafening sound. And perhaps you can guess what kind of creature this new arrival is?

With each animal comical or comforting in its own unique way and the little bird continuously shaking off embarrassment to try again, The Song of Spring is pure pleasure. The fascinating collage elements that Hendrik Jonas incorporates into the illustrations — hoof prints on tile accompanying the pig, curious grids and script along the cow's face and neck — add to this book's ability to hold the attention of caregivers who will no doubt be asked to read it again and again. 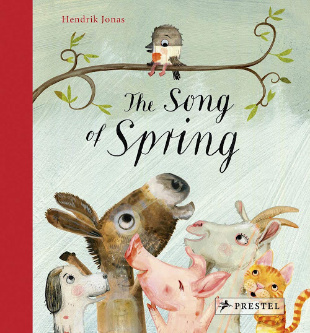