By Kate Banks
An urban child's take-off on the traditional Bible story, with an emphasis on ecological stewardship.

When we first heard the title of this book, a man with a flowing white beard came to mind ... until we saw the cover featuring an adorable boy with a frog on his head and a mouse in the crook of his elbow. This young, modern-day Noah lives with his family in the city, where he can peer over the top of their backyard fence and see a storm cloud climbing over the hill "like a curious ghost."

Knowing a storm is coming, nature becomes restless — beetles burrowing deeper, field mice finding moss for shelter. Noah's father fetches wood to board up the windows, and Noah mirrors his handiwork by reconstructing a broken-down wagon into an ark. In John Rocco's illustration, you can see the boy's thoughtful expression as he plans what to do with his tools. Soon we see him looking with great satisfaction at this new design, complete with the archetypal ramp for the animals.

This mirroring rhythm continues as Noah's mother gets out matches and candles while Noah stocks the ark with nuts, grass, berries, seeds, and even miniature furniture. When his mother calls him to come inside to safety, he calls the creatures in the garden to come, and naturally it's not elephants and giraffes that scurry and slither and flutter two-by-two into the ark but rather salamanders, toads, snakes, mice, beetles, spiders, and even hummingbirds.

The storm — dark, massive, and powerful — proves to be much like the storms ripping along coasts in recent years, and we get to see how Noah and his family in their house and the creatures all huddled together in the ark ride it out for four whole days and nights, even when the backyard floods. When the sun returns, you can imagine the exultation as Noah releases all the creatures back to their habitats.

Having seen this allegory to its finish, readers can return to the cover image and notice the spunk, care, and wisdom blended into Noah's expression as he lays on the grass with his animal friends. In times when weather gives us extreme warnings on a regular basis, we need the qualities that Noah has: protective of all creatures and trusting that we can help things turn out well if we use our minds, creativity, and elbow grease on behalf of stewardship. This book is written for 3-7 year olds, but it calls us all to think about what metaphorical arks we will build. 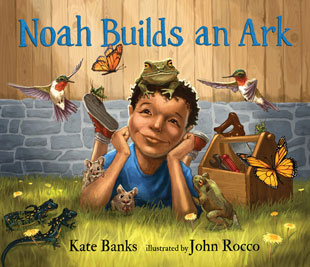