Identity The Demand for Dignity and the Politics of Resentment

By Francis Fukuyama
A look through a philosophical lens at the role identity plays in today's politics.

In a 1989 essay, public intellectual Francis Fukuyama came up with the phrase "The End of History" to describe the downfall of Eastern Bloc socialism as "an unabashed victory" for the form of government in the United States and Great Britain. He was convinced that many more countries would embrace democratic values.

But things have not gone the way he thought they would. Fukuyama is now worried about "the possibility of a modern liberal democracy decaying or going backward." Fukuyama points to the rising influence of the far right in Europe and the Trump administration's practice of the politics of identity in the U.S.

The 14 chapters in this book present the alternating current of political events and the quest for the human soul in the philosophies of Plato and Aristotle, Luther, Hegel, Rousseau, and others. In a fascinating chapter on "We the People," he notes that diversity is both a fact of life and a value, which is good for societies and supports resilience.

Fukuyama concludes: "Identity is the theme that underlies many political phenomena today, from new populist nationalist movements, to Islamist fighters, to the controversies taking place on university campuses. We will not escape from thinking about our society in identity terms. But we need to remember that the identities dwelling deep inside us are neither fixed nor necessarily given to us by our accidents of birth. Identity can be used to divide, but it can and has also been used to integrate. That in the end will be the remedy for the populist politics of the present." 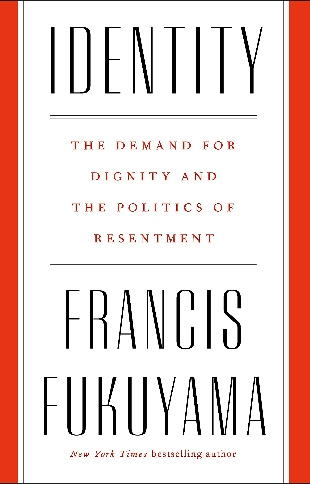