By Cao Wenxuan
How the animals discover cooperation's power to ward off heat.

In summer, with the sun blazing down on the grasslands, how will seven animals — ranging in size from an elephant to a mouse — manage to stay cool? The worried expressions that award-winning illustrator Yu Rong gives them as they run through a dust cloud seeking shelter show that it won't be easy.

The jackal is first to spot a tree, and everyone dashes to its shade, each saying they arrived first. The elephant, being the largest, takes the whole tree for himself, while the others shout that it's not fair. Yu Rong has a vulture look on from the branches, suggesting the seriousness of their situation. The elephant doesn't want to budge and blows dust through his trunk at any of the animals who come near.

It isn't long before laughter breaks the tension, though, as the unsheltered animals notice that the elephant is sweltering, too, because the tree has barely any leaves. Amid their laughter, they see a father and son walk by, with the father's shadow completely shading the boy. Can the animals translate this kindness into their own situation?

Cao Wenxuan is one of the most beloved authors in China. In 2016, he became the first Chinese author to receive the Hans Christian Andersen Award, regarded as the most distinguished international honor for children’s literature. His books describe floods, plagues of locusts, displacement, and other situations we often think children cannot handle, but that they hear about anyway and which are not foreign events to many readers.

This book will provide some gentle reassurance to children ages 3 - 7 about how we can work together to take care of each other in extreme conditions. And they will enjoy an adorable surprise tucked into the format, which we won't give away. 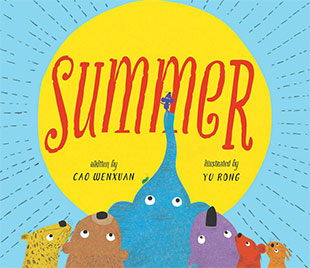