The Universal Christ How a Forgotten Reality Can Change Everything We See, Hope For, and Believe

By Richard Rohr
A contemplative Christian's reconceptualizing of the Christ Mystery.

How does one review a book like this? Imagine how a volume of Meister Eckhart’s sermons might have been received by the average reader in his day (14th century Germany). Not well, I suppose, because there was too much to absorb. There is also too much here to summarize, opine about, and contrast with similar books. There really are no similar books — that’s my point.

Richard Rohr wants a new reformation of the Christian faith, and in that, he’s in league with others. But in another sense, he’s been in a class by himself for at least a decade. He is Western Christianity’s most identified contemplative, the one we think of when we consider that word, that way of approaching life. This is no accident. When Rohr stopped traveling many years ago, he founded “The Living School” in New Mexico, and those who want to learn to become contemplatives (not just Christians) come to him. He appeals to his own progressive Catholics, but also strongly to those, often Millennial and younger, ex-Evangelicals and mainline Protestants who seek to infuse their theological understanding with ancient root spirituality.

Rohr has been writing about “non-dual” thinking, as well as “Oneing” and other similar terms, for several books now, and this broad sweep approach to understanding faith can be freeing. The Universal Christ takes similar adventurous turns at big ideas in “Another Name for Every Thing” (Part 1), and “The Great Comma” (Part 2).

Like a spider in the center of an intricate web, he begins The Universal Christ by identifying “the Christ Mystery, the indwelling of the Divine Presence in everyone and everything since the beginning of time as we know it.” The next 250 pages show how the web was constructed.

Rohr wants you to meet this Christ who has always existed (eternal God), became incarnate in time (Jesus of Nazareth), and who is still being revealed (by the power of the Holy Spirit). This is deeply Trinitarian, to use a traditional Christian doctrinal word, but this is not a doctrinal book so much as it is a philosophical one.

He calls the Universal Christ part of the “perennial tradition.” Many great spiritual teachers of the last 75 years (Aldous Huxley and Reb Zalman Schachter-Shalomi, to name two) have pointed to the perennial tradition to refer to a common source for great spiritual ideas that are shared among religious traditions. Rohr most of all wants you to learn to “see” that spider web. To do so is to build reverence for all creation, realize oneness, and see the essential inter-connectivity of all things. These principles are indeed of that perennial tradition, in that one could find them in other traditions. But for Rohr, it is all due to, and existent in and through, the “Christ Mystery.”

The Universal Christ is the unfolding and revelation of God throughout time and history. Perhaps to show that these ideas are not heretical, Rohr begins by quoting Karl Rahner, one of the central theologians of 20th century Catholicism, in the frontmatter to The Universal Christ: “The only really absolute mysteries in Christianity are the self-communication of God in the depths of existence — which we call grace, and in history — which we call Christ.”

Rohr is writing mostly for fellow Christians. He says:

"[Y]ou and I can reopen that ancient door of faith with a key, and that key is the proper understanding of a word that many of us use often, but often too glibly. That word is Christ.

"What if Christ is a name for the transcendent within of every 'thing' in the universe?

"What if Christ is a name for the immense spaciousness of all true Love?

"What if Christ refers to an infinite horizon that pulls us from within and pulls us forward too?

"What if Christ is another name for everything – in its fullness?"

In order to give space to these big re-conceptions, Rohr at times refers to “Christ,” as in the Person, and at other times to “the Christ,” as the Divine factor and energy of creation. Don’t let that throw you.

He is pessimistic about the state of organized religion today (based largely on “rational assent to beliefs,” he says), but he’s optimistic about the faith of the future, if that faith becomes an inspired encounter with God in the Universal Christ, becoming “a calm and hopeful trust that God is inherent in all things, and that this whole thing is going somewhere good.”

As happens with each of Rohr’s books, there’s a lot of fruit and many seeds. Consider, for example, the many possible applications in the spiritual practices of creativity, imagination, and attention, including in the visual and performing arts, based on this:

"When I know that the world around me is both the hiding place and the revelation of God, I can no longer make a significant distinction between the natural and the supernatural, between the holy and the profane."

My favorite insight of all in The Universal Christ is this one:

"I cannot help but think that future generations will label the first two thousand years of Christianity “early Christianity.” They will, I believe, draw out more and more of the massive implications of this understanding of a Cosmic Christ. They will have long discarded the notion of Christian salvation as a private evacuation plan that gets a select few humans into the next world. The current world has been largely taken for granted or ignored, unless it could be exploited for our individual benefit. Why would people with such a belief ever feel at home in heaven? They didn’t even practice for it! Nor did they learn how to feel at home on earth."

This may especially be true if our damage to our planet home continues to lead to the dramatic changes for humanity that have been widely predicted.

Rohr redefines salvation within Christianity — “The proof that you are a Christian is that you can see Christ everywhere else.”) — which prompts me to conclude with one suggestion: Don’t miss Rohr’s earlier books, as well, such as Job and the Mystery of Suffering and Hope Against Darkness. In these, his passion for spiritual practice and liberation come through more clearly than in The Universal Christ, which might feel to some like a contemplative exercise most appropriate for those times when our ability to engage and work in the world is exhausted. 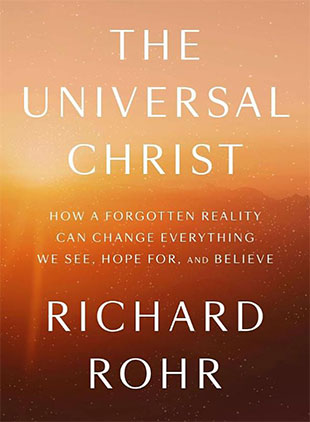