By Frieda Wishinsky
A fascinating history about a highly capable woman.

This book for 7 - 10 year olds opens with an inscription from David McCullough's Brave Companions: "In all, several thousand people took part over fourteen years ... They worked a ten-hour day, six days a week, and they were all men — with the sole exception of Emily Roebling." We then see a sign in honor of Emily and the other builders of the Brooklyn Bridge. A mother points it out to her son, tells him that Emily Roebling inspired her to become an engineer, and begins to share Emily's life story with him as they cross over to Brooklyn.

Even by this first page, illustrator Natalie Nelson's distinctive collages have drawn us right into this story. Through the bridge's vertical suspenders, we can see the Brooklyn skyline and a glimpse of the East River, while the bridge's brick towers and enormous, sloping deck, dotted with pedestrians and a bike rider give us a sense of the bridge's magnificence and scale. Alone with that view comes an intuitive perception of all that Emily achieved.

We learn that people didn't think much of women's ability to learn math and science in the 1850s, when Emily was growing up, but she loved these subjects. Her forward-thinking brother got her enrolled in Georgetown Visitation Convent in Washington, D.C., where she earned high honors, and during the Civil War he introduced her to his aide, Washington Roebling, a soldier, engineer, and bridge builder. The two quickly fell in love and married.

Washington's father was building a suspension bridge connecting Manhattan and Brooklyn, but only two years into the task he died. With Emily's encouragement, Washington took on this big, complicated project in 1869. The illustrations show us the airlocks, caissons, and other daunting equipment needed to build the bridge, dwarfing the workers, and we see a worried-looking Emily with a speech bubble saying, "Please be careful, Washington."

But like many workers, he developed the bends from moving too quickly in the compressed air necessary for building down to bedrock. Ill and wheelchair bound, he pondered with Emily what to do. She decided to learn everything she could about engineering and the bridge and to pass along all Washington's instructions to the workers.

Her obvious know-how in explaining every aspect of the bridge soon started winning over even people who were skeptical about a woman's ability to run an engineering project. And you can guess who the first person was to cross the bridge in 1883 when it was completed! "She carried a live white rooster," Wishinsky tells us, "as a symbol of victory and good luck."

Even to say that much barely scrapes the surface of this book. It goes into detail about the challenges Emily faced, applauds her achievements after the bridge, and has a special page for "Six Amazing Facts about the Brooklyn Bridge," including that P.T. Barnum was hired to have 21 elephants march across the bridge to convince people that it was safe. But this astounding fact pales beside the remarkable way Emily Roebling rose to an occasion tossed into her lap by fate.

How Emily Saved the Bridge winningly conveys the competence of women in engineering and the strength of the human spirit in overcoming adversity. 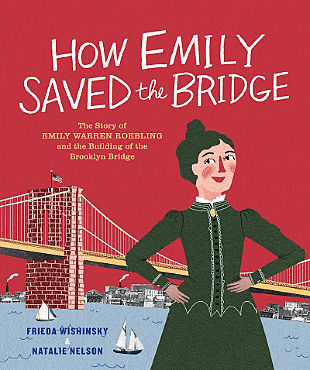