Losing Reality On Cults, Cultism, and the Mindset of Political and Religious Zealotry

By Robert Jay Lifton
An analysis of the far-reaching effects of leaders who lust after control of others.

Robert Jay Lifton is currently visiting Lecturer in Psychiatry at Columbia University. He has taught at Yale, Harvard, and the City University of New York. He has written over 20 books, including Superpower Syndrome, The Broken Connection: On Death and the Continuity of Life, The Nazi Doctors, and the National Book Award-winning Death in Life: Survivors of Hiroshima.

Lifton has written extensively about "those who claim ownership of the minds of others"; among this unsavory and murderous lot are Hitler, Mao, the Japanese cult Aum Shinrikyo, and many cult leaders. With two focused eyes, he takes a hard look at Mao's massive effort at thought reform which resulted in the deaths of three million people.

In an essay first published in 2018 he assesses the behavior of Donald Trump and describes it as an assault on reality: "At issue is the attempt to control, to own, immediate truth along with any part of history that feeds such truth." As time goes on, the public experiences "reality fatigue":

"The drumbeat of falsehoods and lies continues even as we expose them as such: we are thrust into a realm in which a major segment of our society ignores or defies the principles of reason, evidence, and shared knowledge that are required for the function of a democracy."

Lifton delineates and then discusses "The Eight Deadly Sins" of ideological totalism sought by those who need to control others and remake the world to confirm to their code of purity. Given the dangerous leaders in positions of power in today's world and their talk of possible collaboration, now is the right time to read and reread Lifton. He is well-versed in the trick maneuvers of those who seek to control the minds of others. 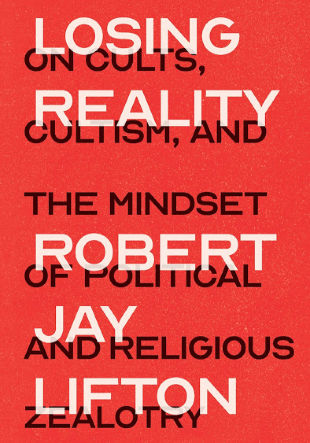