Equality's Call The Story of Voting Rights in America

By Deborah Diesen
An inspiring reminder of the ongoing fight to make a founding ideal a reality for all.

Illustrator Magdalena Mora ushers us into this story by showing us a classroom of eager-to-learn children as diverse as they are vibrantly dressed. Their teacher writes "Voting Rights" on the blackboard, and the story takes off, passing gracefully between the intent students and historical flashbacks — and then back again to the classroom each time a new milestone in voting rights is introduced. In this way, the past and the present intertwine so that readers feel their own part in this vital evolution.

Deborah Diesen has pulled off a difficult feat: rhyming the text — which makes it memorable and carries the story arc forward with an inviting tempo — while keeping natural syntax. For instance:

Our founders declared
When our country began
That consent of the governed
Was part of the plan.

We're brought through the founders' intentions, the plight of slaves (for whom this founding ideal was not real), the dropping of rules about wealth, the 19th amendment, voter suppression, and more. As each new chapter of voting-rights history unfolds, we are met with variations on this refrain:

We heard it, we felt it,
Equality's call:
A right isn't right
Till it's granted to all.

In case you're one of those people for whom the pictured historical figures look familiar but are hard to name, Diesen and Mora include a long list of voting-rights activists at the end, with relevant portraits that mirror earlier illustrations: of Susan B. Anthony, Carrie Chapman Catt, Anna Julia Cooper, W. E. B. Du Bois, and Fannie Lou Hamer, to name a few. Descriptions of voting-related amendments and legislation add a further dimension for those who want to delve deeper.

It's to the credit of both the author and the illustrator that the book is listed for 3 - 8 year olds; the rhymes and the captivating illustrations bring what could otherwise be heady material right down into immediate realms that even a young child can appreciate. The emphasis on the present and future also bring this book alive for young children, as it reminds us that "we honor these rights / to make sure that they last." We highly recommend this book to anyone who wants their children to consider the closing question that's offered: "How will you answer equality's call?" 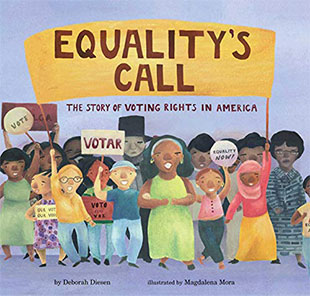