We Are Water Protectors

By Carole Lindstrom
A vibrant reminder of water's sacredness and our responsibility to safeguard it from harm.

We Are Water Protectors, illustrated by Michaela Goade, is the 2021 winner of the Caldecott Medal for the most distinguished American picture book for children, awarded by the American Library Association. Goade, an enrolled member of the Tlingit & Haida Indian Tribes of Alaska, is the first indigenous artist to win the award.

Young people often show considerably more environmental concern than adults do. We see this difference in nearby matters — a child who cries when she sees a wounded deer or who reminds us to turn off the faucet while we brush our teeth — and on a global scale, too, like the young climate-change activists who have rallied around Greta Thunberg's leadership.

We Are Water Protectors, written for 3 – 6 year olds, nurtures and strengthens this inclination to safeguard Mother Earth. Written by Carole Lindstrom, tribally enrolled with the Turtle Mountain Band of Ojibwe and a fierce water protector herself, it starts with a grandmother telling the young narrator that "water is the first medicine." In the accompanying picture Michaela Goade, an award-winning designer and illustrator of Tlingit descent, shows water pouring in a waterfall through the elder's hand into the palm of a thoughtful young girl. Each of them is half immersed in pure waves of deep blue.

When we come from the water of our mother's womb and know water to be sacred, though, what do we do when confronted by the black snake which many Native Nations say will destroy the land? On the pages of this book, we witness it turning birds and fish to skeletons as they come too close to its body: an oil pipeline. Predicted long before it arrived, this snake is now here, making water unfit to drink.

Lindstrom does not leave us waiting long for an answer, as she writes large letters, "Take Courage!" While acknowledging it will not be easy — and here we see people hand-in-hand facing the snake's terrifying face — we hear the refrain which repeats every few pages:

We stand
With our songs
And our drums.
We are still here.

The book does not hide the tears which "like waterfalls stream down" in sorrow over the harm done to creatures who cannot fight for themselves. But even so, it offers a vision of people standing together with unbroken spirit.

A detailed and poignant afterword describes the efforts of the Standing Rock Sioux Tribe to stand up against the Dakota Access Pipeline. The final page offers an Earth Steward and Water Protector Pledge, which could be the start of a child's lifelong commitment. 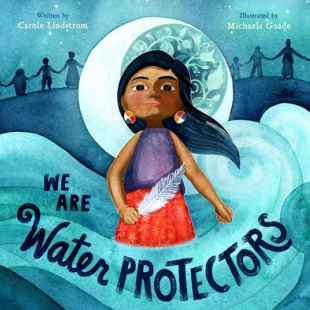