By Robert D. Putnam, Shaylyn Romney Garrett
A bold and visionary call for a communitarian society.

Robert D. Putnam is the Malkin Research Professor of Public Policy at Harvard University and a former Dean of the John F. Kennedy School of Government. He has written 14 books and has been called America's "poet laureate of civic society." His colleague on this book is Shaylyn Romney Garrett, a writer and award-winning social entrepreneur who is a Founding Contributor to "Weave: The Social Fabric Project" of the Aspen Institute.

In this magisterial work, Putnam assesses America's admirable balance in the 1830s between individualism and community. But the center did not hold as the nation swung into the Gilded Age of corruption, staggering economic inequality, and political scandal.

With dizzying speed, the country roared into a time of reform from 1901 through Lyndon Johnson's Great Society. Putnam sums up this Progressive era as one where the nation "had been transformed into a more egalitarian, cooperative, cohesive and altruistic nation." But the pendulum careened back to a philosophy of supreme self-reliance as a commendable ethic to live by, along with a weakened public square.

Putnam sees the 1960s as a period of severe political, social, and cultural unrest and backlash — especially in racial and gender turmoil. These trends continue to this day. It will take heavy doses of active citizenship, bipartisan collaboration, and communitarian renewal to move from a "I" society to a "we" society in the years that lie ahead. This fascinating read, however, makes it clear that change has happened before and can happen again. 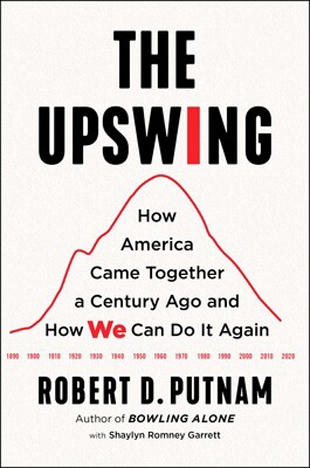