By Caron Lewis
A nuanced story about a friendship tested by life's storms.

This endearing book was inspired by the real-life friendship of Charlie the horse and Jack the goat at the Wild Heart Ranch Wildlife Rescue and Rehabilitation Center in Claremore, Oklahoma. There animals can get help if they need protection or a chance to recover from illness or injury. Some, like the two characters in This Way, Charlie, make the ranch their permanent home.

In the story, Jack — whom illustrator Charles Santoso portrays as having one horn shorter than the other, although little more is said about his early life traumas — is a bit of recluse. He observes the other animals on the ranch but doesn't really like or trust anyone, except perhaps Antonia, their caretaker. So with great annoyance Jack snaps, "Hey!" when Charlie, a new arrival, stumbles over him. Antonia explains that Charlie can only see out of one of his eyes and that "everybody deserves plenty of food, love, and patience."

Armed with this new information, Jack takes his time observing Charlie. One of the book's characteristically revealing and sympathetic illustrations shows Jack's vigilant stare from behind a bush, conveying all at once his interest and fearfulness. He begins to see what he and Charlie have in common, like sniffing the honeysuckles. Eventually, Jack steps up bravely and says, "This way, Charlie," leading the horse to his favorite field to graze and bathe in sunlight.

As with any traumatized creature, humans included, Jack's newfound practice of kindness does not go in a straight line. When Charlie wants to play with other animals and Jack shouts at him defensively, their normally cheerful friendship gets sorely tested. The two separate in stony silence, not realizing the scale of a thunderstorm that's brewing. What happens in the storm becomes the turning-point in Jack's life, the moment when the care he has received changes reliably into care he can also give.

Caron Levis, the author of several picture books, is a professor and advisor for the New School's writing for Children/YA MFA program. In a note at this story's end, she tells all about its genesis and the rehabilitation ranch upon which it's based. She also steers readers to a free online activity packet for pre-K through 5th-grade children to explore the book further. She closes by wisely musing that "it is both the challenges and the triumphs of friendship that help us find our way to the sunlit patches and through the rain." 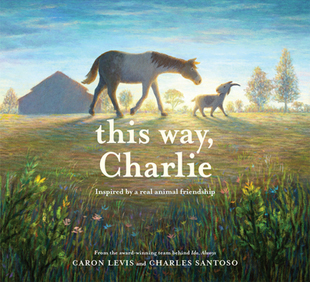