By Sigal Samuel
Sumptuously illustrated tales from the life of a brilliant scholar.

Sigal Samuel — a staff writer for Vox and a former associate editor at The Atlantic — stumbled accidentally upon the story of Osnat Barzani (1590 - 1670) when she was doing research for a play about Jewish women. In an interview with Lior Zaltzman of The Jerusalem Post, Samuel recalls, "I was stunned to learn that this Kurdish woman became the world’s first female rabbi way back in the 1600s!" The story felt especially close to home because Samuel is a Mizrahi Jew whose family hails from Baghdad, not far from Osnat’s hometown of Mosul.

Osnat's true story, accentuated with elements of folktales told about her, reads like a fairy tale. She adored her father, who built the yeshiva in Mosul and other towns, and convinced him to teach her how to read, even though at the time that skill was normally reserved for boys. He went even further and gave her a rare education in Hebrew, Torah, Talmud, Midrash, and Kabbalah.

Vali Mintzi, the book's illustrator, portrays these scenes with sumptuous details in gold, red, and purple patterns worthy of Persian art. Viewing the scene from above, we see her father patiently bowing over an open volume, pointing to letters as his daughter kneels eagerly on the other side. In another picture young Osnat is climbing this way and that, full of vibrant curiosity, on bookshelves holding volumes nearly as big as she is.

When Osnat came of age, she refused to marry anyone who would expect her to do chores rather than study Torah. Naturally this led to a great deal of scoffing among shocked bachelors. But she then met a man named Jacob who understood and appreciated her scholarship, and they happily started a family together. He became head of the yeshiva when Osnat's father died, and Osnat taught the students he was too busy to teach. She was heartbroken when Jacob, too, passed away, yet went on to serve as the community's rabbinical leader in his stead. Although she was never called rabbi,* she was given the title Tanna'it, reserved for only the most respected teachers.

Many mystical tales are told about her. Once when she was visiting another synagogue, it caught fire, with the precious Torah scrolls still inside. It's said that Osnat whispered a secret name that her father taught her, whereupon a flock of angels — or were they doves? — beat the flames with their wings until the fire was extinguished.

Sadly, few of Osnat's writings remain. But this very lack makes Samuel and Mintzi's book, written for four to eight year olds, all the more valuable as a testament to this remarkable woman. She deserves to be known by everyone who treasures spiritual teachings and practice.

* Editors' note: Scholars do not agree about who deserves the title of first female rabbi. While Regina Jonas (1902 - 1942) was the first woman actually called "rabbi" and Hannah Rochel Verbermacher (1815 - 1888) was the only independent female rebbe in the history of the Hasidic movement, Osnat Barzani long preceded them. 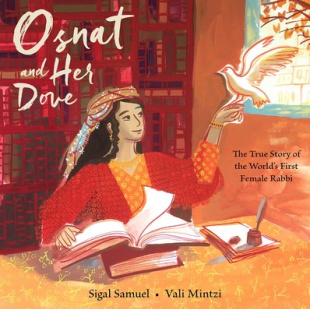