By Jane Yolen
A tale about confidence taking the form of a brave ursine companion.

Newsweek called Jane Yolen "the Hans Christian Andersen of American children's literature." Bear Outside — the 400th (!) book of this beloved author of fantasy, science fiction, poetry, essays, and children's books — plays with the idea of a brave, comforting ursine companion.

While some of the children on the playground are busy unleashing their inner lions and tigers, sometimes in the form of cruel taunting toward the girl who tells the story, she herself is surrounded by a female bear more than twice her size whom she wears on the outside. "It's like wearing a suit of armor," she tells us.

But this girl is far from rigid or closed off. On the contrary, her protective bear helps her function in the classroom, at the grocery store, and in her own backyard. Illustrator Jen Corace reveals the benefits by showing the bear raise her hand in response to a teacher's question, while the girl sits shy and reticent, hands down. And it's bear who hands the largest share of flowers in a bouquet to a neighbor, in an act of reaching out which can be daunting for a child.

Yolen and Corace sprinkle humor into the text and pictures. While bear and girl do almost everything together, for instance, that does not hold true at swimming lessons, where the girl needs her floaties more than she needs an enormous bear!

Bear Outside is designed for readers ages 4 - 8. Its infusion of confidence and courage will be most valuable to children who feel a bit different from the crowd or need extra support to engage in everyday life. Then again, that description could fit most of us from time to time! So the book carries Yolen's characteristic universal appeal. And for children who are innately gung-ho about jumping into life with both feet, it can build empathy toward their more hesitant companions. 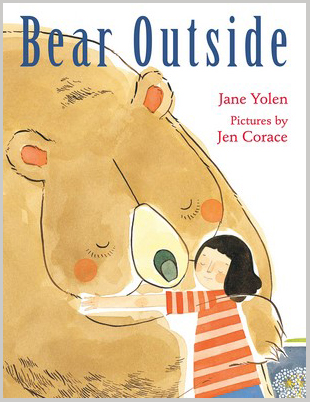