By Lisa Westberg Peters
A tribute to the many migrants who have made the United States their home.

History lessons in childhood left some of us with the impression that migration to North America began in the 1500s with Spaniards arriving in St. Augustine or in the 1600s with the first permanent English settlement at Jamestown. We Are a Garden stretches much further back in time, before Europeans, to migrations of the first people crossing from Asia to what is now Alaska more than fifteen thousand years ago. It brings us right up to contemporary immigration, which makes it no exaggeration to say that this book is awesome in scope for 39-pages intended for readers 4 - 8 years old.

Lisa Westberg Peters — author of nineteen children's books, including many that have received starred reviews — achieves this feat by featuring some of the groups of migrants to the United States that she considers particularly significant. These include ones that "were the first to arrive, ... came in great numbers, or ... made significant agricultural or industrial contributions to our nation."

Together with illustrator Victoria Tentler-Krylov, she brings children into experiences of migration with which they can identify. For instance, a girl and her clan cross into the continent "when glaciers still covered the north and herds of mammoths still wandered the frozen tundra." We see her and her clans-people dressed in furs amid a snowstorm, looking strong and unfazed as a herd of mammoths peers back at them from the edges of the pages. We begin to understand something of the courage and spirit of adventure that drove these migrants forward.

As the title suggests, the book wraps these migrations in the imagery of seeds blown by the wind to a new land. The wind blows those who live in northern forests to a new home in the southern deserts. It blows families who are weary of hunger or religious oppression in their homelands, and later, it blows millions of people from Mexico, who wind up doing "the backbreaking work of harvesting the nation's crops."

The author and illustrator do not gloss over the challenges and darker chapters of migration history. Although only a couple of pages each are given to tragic portions — like conquistadors slaughtering a tribe or the forced migrations of slaves who had to work "for people who did not treat them like humans" — both author and illustrator handle these scenes with empathy for those harmed and with age-appropriate perspective.

A section on the Statue of Liberty, with its familiar welcome:

"Give me your tired, your poor,
Your huddled masses yearning to breath free ..."

provides a transition to ten pages about contemporary migration, whether a mother cleaning hotel rooms with her baby in tow or "a thirteen-year-old refugee who adjusts her head scarf in the bright afternoon sun and declares she will be a doctor someday."

The story ends on a celebratory note, emphasizing the diverse garden that grows from all these wind-dispersed seeds. For those who want to know more, the book contains two pages of notes that cover in greater depth each of the migrations mentioned. A robust list of many of the sources that Lisa Westberg Peters used in researching the book rounds out this excellent introduction to the roots of our diversity. 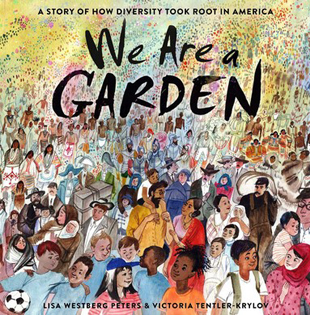