By Norman Fischer, Kuya Minogue (editor)
An opportunity to enter Zen practice for one year.

We have reviewed many books by Norman Fischer, a Soto Zen priest who practices in the lineage of Shunryu Suzuki (author of the classic Zen Mind, Beginner’s Mind); he is profiled in our Living Spiritual Teachers Project here.

The 52 short chapters in this book are transcribed from talks given by Fischer in 2012. They represent a close study of Dogen’s Mountains and Rivers Sutra, an essential text of Soto Zen. Dogen lived in Japan during the first half of the thirteenth century.

The reader is encouraged to read the book one short chapter at a time, for a year, and engage with both the teachings and spiritual practice suggestions, many of which clearly are offered from a place of deep experience. We often see spiritual practice ideas that are only a sentence or two; some of these are almost as in-depth as the teachings they follow.

It is important to “enter into” these teachings. It’s a basic understanding of Buddhism that mountain peaks and flowing waters hold keys to actualizing the Buddha way, and to begin to see this one must begin to practice with them. Consider taking on this book if you have an opportunity to be close to mountains and rivers (or be “close” to them in memories of previous experiences). Then you will be able to experience these very poetic teachings, representing centuries of Buddhism wisdom, such as:

” 'In the mountains' means the blossoming of the entire world.”

“You who study with buddhas should not be limited to human views when you see water. Go further and study water in the buddha way. Study how you view the water used by buddha ancestors.”

“There is no such thing as something solid; everything is moving all the time.”

Study and practice are necessary, in Zen, because, in the teachings of Dogen, “true birth, the birth that makes all birth possible, is always going on beyond the world we can see.”

try a practice on vision 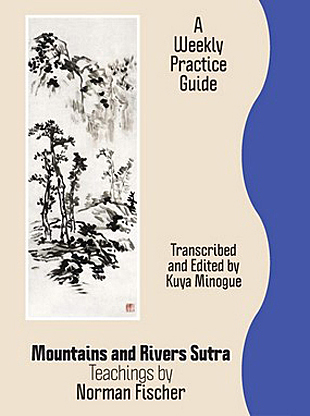