A Bowl Full of Peace A True Story

By Caren Stelson
The tale of a bowl passed down through generations that survives an atomic bomb blast and brings hope for the future.

This is a story about peace, as the title suggests, but foremost it is a book about gratefulness, a "great fullness" that recognizes each given event as a gift. Each moment is given to us and invites us to ask: What opportunity can we find — even when faced with a terrible challenge — to heal, to help, to cultivate peace?

The journey of gratefulness in A Bowl Full of Peace begins shortly before World War II in the Japanese city of Nagasaki. Young Sachiko and her family gather each evening around their dinner table with Grandmother's leaf-shaped bowl at the center. This bowl has been passed down through so many generations that no one even remembers when it first came into the family. Before eating from the delicious offerings in the bowl, Sachiko and her family bow their heads and quietly say together "Itadakimasu" — a Japanese Buddhist prayer meaning "we humbly receive this food."

This true story sensitively and gently carries us through the difficulties to come. Even as war sets in, Sachiko and her family gather around the bowl each evening and say "Itadakimasu" together. Their mother reminds them, "Eat everything, children. Every bit is precious."

When an atomic bomb explodes over Nagasaki on August 9, 1945, "no one even notices until it is too late." We see a bright blast in a brown sky, and then another page that's entirely shades of smoky brown. After a moment of bafflement — "What happened?" — Sachiko looks around her, and sees that most of her family survived the blast. But Toshi, her youngest brother, was killed. The family's home is reduced to rubble, and they have to leave Nagasaki.

Then, as radiation sickness sets in, one after another of her family members become ill. Ice soothes their throats, although "nothing can stop the pain, not even the end of the war."

But when some members of the family get to return to their home two years later, they discover Grandmother's bowl, without a single chip or crack! A miracle of hope and connection, it has on it the fingerprints of all the family members, even those who have died.

On the anniversary of the bombing, Sachiko's mother fills it with ice and softly says:

We must never forget what happened on this day.
Remember how a chip of ice eased our thirst?
As the ice melts, let us remember all who suffered
and all who died. We must pray that
such a terrible war never happens again.

Sachiko does pray, and her prayers turn into grateful action. After she becomes the sole survivor in her family, she grows determined to tell her story through the miracle of the intact bowl.

Author Caren Stelson spent many hours interviewing Sachiko Yasui during five visits to Japan and is intimately able to convey her story. In shared meals with Sachiko, she came to treasure the ritual of saying "itadakimasu" and the gratefulness for everything that it represents.

Illustrator Akira Kusaka belongs to a generation that has not experienced war, and her evocative art reflects her understanding that soon there will be no eyewitnesses to the Hiroshima and Nagasaki bombings left. "That is why Sachiko's story of surviving the atomic bomb is especially important," Kusaka writes in an end note. Reminding us that we still live under the shadow of nuclear weapons, she hopes that "Sachiko's hope for peace will be passed along to you and to future generations to come."

The suggested reading age for this book is 6 to 11 years. The reminder of how much hinges on the spiritual practices of gratefulness and peacemaking is one that we all need to hear. 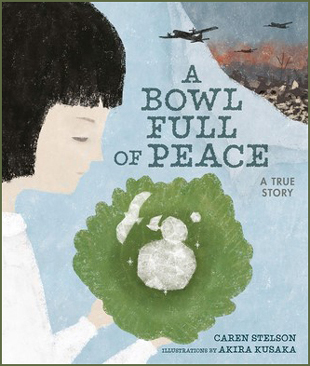