By Patrick Saint-Jean
Challenging devotions linking the experiences of Christ in his passion with those of Black victims of racial violence.

The author, Patrick Saint-Jean, is a Black Catholic Jesuit who was raised a Southern Baptist. A native of Haiti, he was educated in France and became a psychoanalyst and a college professor of psychology.

His sources are varied, from Thomas Merton to Stokely Carmichael, Desmond Tutu to James Martin, James Baldwin to Henri Nouwen, Michelle Obama to Pema Chodron. But, most of all he draws from the Spiritual Exercises of Ignatius of Loyola.

Saint-Jean writes that you don't need to be Catholic to learn from Ignatius, founder of the Jesuits. He finds that Ignatius' teachings give him “a structure for building a faith that is both deeply spiritual and functionally practical.”

Like the Spiritual Exercises, The Spiritual Work of Racial Justice follows a daily routine for four weeks. On Day 2 of Week Three, when the Spiritual Exercises call for contemplation of “Christ Accused and Found Guilty,” Saint-Jean focuses on “People of Color as Innocent Victims” and painfully recounts, with grim accuracy, the legacy of white lynching of Black people in the United States up through and including when, in 1981, Ku Klux Klan members slit the throat of Michael Donald — a nineteen-year-old in Mobile, Alabama, who didn’t even know his murderers — and hung him from a tree.

Then Saint-Jean tells of innocent Black men who are accused of crimes and often incarcerated, even killed on Death Row, for crimes they did not commit. He ends that day’s selection with, “Will you allow your prayers to lead you to action? Will you take up the fight?”

Similarly, on the next day, “Taking Up the Cross” is about “The Work of Justice.” The day after that, when someone on retreat with the Spiritual Exercises focuses solely on standing beneath the cross where Jesus hung, the reader of this book relates that imaginative experience to answering the question, “Where Do You Stand?”

For each day, there is a reflection of nine or ten pages, followed by journaling prompts, a quote for further reflection, and a prayer. 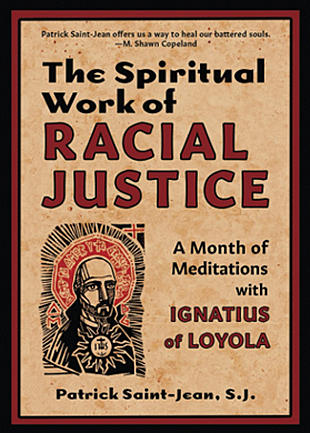