By Matthew Juksan Sullivan
A generation-defining rendering of one of the great Zen Buddhist scriptures.

This is a study manual for students of Zen. There hasn’t been a book attempting to translate and thoroughly introduce these 100 classic teaching tales, first compiled in the twelfth century, since the work of Thomas Cleary and J. C. Cleary (titled The Blue Cliff Record) published by Shambhala in 1992.

This rendering by Matthew Juksan Sullivan, a young Zen master in the Korean Zen tradition, seems to strike a more egalitarian and accessible approach than any that has come before it. It is also well-suited to anyone seeking to understand Zen in the twenty-first century, emphasizing, as it does, the lack of doctrine in these stories and even the near total absence of meditation.

What is here, then? Not practical answers to everyday problems and situations. As Sullivan explains in the introduction, “The Blue Cliff Record is the antithesis of a self-help book. It seems more of a self-frustration book.”

The Zen practitioners who long ago wrote these short tales — which are called “cases” — realized that oftentimes “there are insights about one’s true self that cannot be communicated in a straightforward manner through lectures, sutras or learning.” The tales in The Blue Cliff Record, some of which are as brief as a couple of sentences, are meant to communicate directly to the human mind.

Sometimes Sullivan is able to make the meaning quite clear with his commentary, as in the “Second Case.” We will quote the case in full, and then just the beginning portion of Sullivan’s commentary:

“A monk asked, ‘Since you do not abide in pure clarity, what do you cherish?’

“The monk said, ‘Since you don’t know, Master, why say you don’t abide in pure clarity?’

“Zhaozhou said, ‘Inquire and straight away you receive. Make a bow and withdraw.’ ”

“On a sunny afternoon when I was five years old my mother decided to buy me a balloon. There were two choices: a balloon with a rocket ship and another with a dog. I couldn’t pick between them. I was not an even-tempered child, and before long, I was inconsolably sobbing, all because I could not figure out which balloon would make me happy. Nothing my mom could say could reach me or calm me down. Finally, she made a decision, bought a balloon and brought me to a quiet place where I could cry it out. Only as we were walking away from the store did we realize that the balloon had both designs printed on it, one on either side.”

But one doesn’t always grasp the meaning easily. With most of the cases (they are also sometimes called koans), one sits with them for a long time, also with the helpful commentary (often ten times the length of the case), until perhaps the goal is reached, which is not so much what we typically call “learning” but rather “waking up” and “seeing.” Waking up to what? To “see one’s nature and become a Buddha” is the goal. 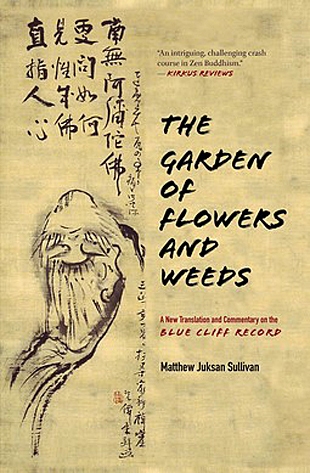