By Amy Cherrix
A wonder-filled introduction to the variety of abodes that creatures construct.

In 2019, game-show contestant James Holzhauer had a 32-game winning streak on the quiz show Jeopardy! and attributed his success to studying information-packed children's books. If Animal Architects had been around then, its fascinating facts surely could have contributed to his success.

Designed for readers ages three through eight, the book introduces the architectural labors of 11 creatures: coral, trapdoor spiders, male satin bowerbirds, female worker ants, gentoo penguins, prairie dogs, cathedral termites, carrier snails, honeybees, beavers, and harvest mice. Each description calls upon wonder. We get to imagine, for instance, coral larvae with their project of building Australia's Great Barrier Reef taking 10,000 years and covering 133,000 square miles (visible even from outer space!) and then turn our attention to termites, who make bricks out of dirt and stack them nearly 30 feet high into towers with solar-heating capabilities.

Illustrator Chris Sasaki captivates us with the amazed eyes of a female bowerbird beholding the magnificent bower full of colorful petals and shiny shells that a male has built to attract her, by a cut-away of ants' "roller coaster network of tunnels and trails," and by much more. We especially love the picture of a little harvest mouse with legs splayed against a "V" of grasses as she starts building the bead that will eventually become a tennis-ball-sized nest. Her eagerness and determination seem to pop right off the page: 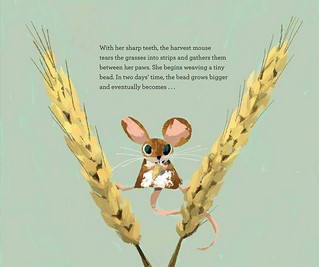 The book draws these various animal lives and architectural projects into a broader framework of reverence for the endless variety of invention. An exquisite orange, green, blue, and white marble of Earth as seen from the starry heavens accompanies the lines:

So if you and the children you know would like to marvel anew at creation — and pick up some astounding facts along the way — look no further than this book. 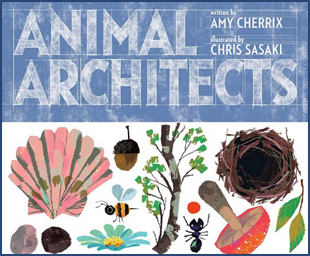