At Spirituality & Practice, we’re interested in the wisdom of trees. See for instance our Process Musings blog about “Aging and the Wisdom of Trees” and our review earlier this year of a beautiful book, How I Became a Tree, by Sumana Roy.

Author James Canton is a particularly gifted writer on nature, wildness, and landscape. But our real delight in The Oak Papers was the attention he pays to spiritual practices.

Canton writes from the base of an 800-year-old oak tree, known as the Honywood Oak, just a few miles from where he lives in North Essex, England. There are other trees that old, including at least one on the North American continent. We reviewed a book nearly twenty years ago about a similarly old Douglas fir in the Pacific Rain Forest.

Canton says about being in the presence of his tree: “I felt calm descend. Once there I wanted only to watch the comings and goings of the birds, the bees and the rest of the creatures that formed the ecosystem that existed around and about and within that ancient oak.” He began, he says, to visit the oak like someone would visit a friend. His book is an account of, in his words, “what happened to me” after years of such cross-species friendship.

Part One begins with “Seeing the Oak,” telling its history and place and features but also reflecting frequently on seeing as a spiritual practice. There are moments when he feels that he’s received a kind of enlightenment from his patient practice of sight and attention. In our spiritual alphabet, we call this “Wonder.” Canton writes:

“Buddhists call such fleeting moments satori — when the façade of our normal existence falls and we see beyond, feel the possibility of enlightenment. We live each day of our life feeling, if nominally, in control of our daily journey through life and knowing our regular path in the world. Then, in such moments of wonder we can only stand and stare. We can no longer see the everyday. We can only feel our presence here as light as air, our feather-like existence upon this earth as ethereal and fragile as a seed head in the wind.”

Canton then offers much lore and history about the links between oak trees and civilizations in Europe and North America, including from Homer’s Odyssey and Druidic and Celtic understandings.

Part Two is “Knowing the Oak” and includes references to great authors of the past, such as Pliny the Elder, John Keats, and James Frazer, whose book, The Golden Bough (widely read until a half-century ago) detailed for a large audience how tree worship once animated peoples throughout Europe in prehistoric periods. A wide range of authors, such as Virginia Woolf, John Fowles, Tolstoy, Thoreau — and lesser lights — pop in throughout the chapters.

Part Three, “Being with Oaks,” relates the love Canton experiences with and for his tree. Again, seeing and vision are never far from his reflections: “It can take many years of being in a place before we are finally able to see what there is to see.” Then there is more than love; there is security as well, and there are other oaks, other trees, some of whom also have names that feature capital letters, to which the author turns. He is applying the wisdom he has learned to new environments and situations.

The emotional, spiritual, and health benefits of seeing, knowing, and loving trees are awesome. Canton writes late in the book: “I sit upon this oak bough. Raised from the ground, I sense the day transforming from the dull drudgery of human needs that have filled the morning to now, when a pure immediacy exists in simply sitting in this oak tree. I feel the roughness of the oak skin on mine. My fluttering thoughts vanish as I climb.” We should all be so fortunate, and so worthy. 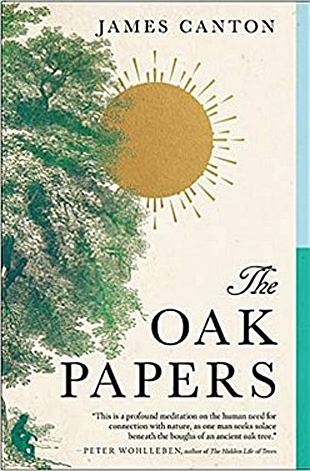