By Michael G. Long
How a simple and bold design representing nuclear disarmament came to inspire people around the world.

Although we have long cherished the peace symbol, we knew nothing about its origins beyond its ubiquity in the 1960s and '70s. We owe our newfound appreciation for the symbol's history to Michael G. Long — who in addition to this book has written for all ages on civil rights and peacemaking in mid-century America — and Carlos Vélez, whose illustrations add immeasurably to the tale.

Three Lines in a Circle begins in 1958 at the drafting table of Gerry Holtom, a graphic-design artist and conscientious objector. Wanting to put his wish for nuclear disarmament into a bold and easily recognized design, he chose "three lines in a circle" based on the flag-semaphore alphabet. Flags held to the side, angled toward the earth, represent the letter "N"; and standing erect with one flag lifted and another lowered represents the letter "D"; the two together symbolize Nuclear Disarmament.

Holtom's inspiration for the circle portion of his symbol came from Francisco Goya's painting "The Third of May 1808," a copy of which the illustrator includes in his first picture of Holtom's drafting table. Other intriguing art and objects on the table, like Tolstoy's War and Peace and a globe, add depth to the book. The text — for three to seven year olds — remains simple: "Gerry hovered over his drafting table and began to draw his dream."

This symbol of Gerry's dream — a world free from bombs — begins to energize people around him who share his vision. One colleague mocks him, saying, "It doesn't mean a thing, and it will never catch on." In an encouragement to children everywhere who dream big, the book quips, "Wow — was he ever wrong!"

It's a joy to see, page by page, how many places around the world and how many different movements this symbol came to influence, as it took on broader meanings of peace and acceptance. Not only Ban the Bomb, but also peace "for Black people and Brown people / women and poor people / LGBTQ+ people and people with disabilities," ending gun violence, stopping climate change, and more. The bright, colorful, detailed illustrations give us a sense of the great swelling of desire to create a livable, loving world.

The book concludes with a short history of the peace symbol, two pages that give more context for older readers. The final touch is a partial time line of peaceful protests since 1958, which includes events like the 1984 sit-ins against apartheid in Washington, DC and the 2003 Freedom Rides for immigrant workers. All in all, this book inspires a desire to act joyfully on behalf of our best dreams, just as Gerry Holtom did when creating a peace symbol that caught on around the world. 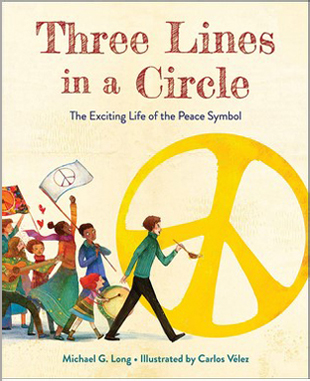