God Is a Black Woman

By Christena Cleveland
Knocking over the idol of the white male god.

There have been many books that have aimed to knock over what Christena Cleveland calls in her book the cultural “whitemalegod,” but the image and presumption still persist among the majority of Christians, and we all still live, in Cleveland’s phrase, “in a white male God’s world.”

This is the work of a psychologist and theologian, but it is also a memoir. She explains her reasons for leaving Evangelical Christianity, sometimes provocatively, as under the heading, “Severing My Career as Christianity’s House Nigger.” She offers examples of her own work in the section called Recovery. And she describes undertaking a pilgrimage to study history’s Black Madonnas, on a trek across France to visit a variety of shrines to the Sacred Black Feminine.

Chapters alternate between explorations of the Sacred Black Feminine and the god who needs to be dismantled. The “whitemalegod,” in Cleveland’s words, is a god in whom we cannot trust, who shows a disgust for human need, who makes war on our bodies, and who is the author of liturgies of fear.

In contrast, the Sacred Black Feminine is:

Other images are dismantled along the way too, including “fatherskygod,” and here the author explains that hers is not entirely a revisionist Christian project:

“[S]cholars who have studied the patriarchal forces in Christianity, Buddhism, Islam, Judaism, and numerous Indigenous spiritualities have concluded that the perception of God as solely transcendent is a distinctly masculine idea that only thrives when we silence the more feminine idea of God’s intimate presence in our lives. When the feminine is silenced and God is exclusively male, he becomes a detached, off-planet god that I call 'fatherskygod.' When we need him most, fatherskygod isn’t anywhere to be found.”

Some of our favorite teachers from a decade or two or three ago are among those quoted by Cleveland, including Clarissa Pinkola Estes and Andrew Harvey.

Perhaps most importantly, her book includes spiritual practices for accepting and loving one’s body that will be useful to many people. See the excerpt accompanying this review for a sample of this. 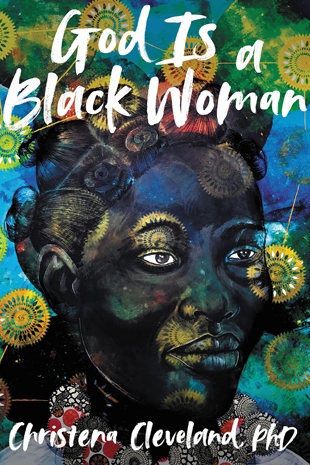