One more book review for the year 2021, because we did not want to miss this one. San Juan de la Cruz, known more often by English speakers as St. John of the Cross, lived a fascinating life which is briefly and beautifully told here. His poems — despite the impression one might have from the poet’s name — are often suitable for people of all faiths.

Juan de la Cruz was beaten and abused as a young adult by fellow religionists of his Carmelite religious order who did not like the reform movement of which he was a part, and then Juan dramatically escaped one night by climbing through a window. He was a fairly severe ascetic, sometimes beating himself in an attempt to “subdue” the flesh in order to make more way for the soul.

The translators of these poems from their original Spanish are Maria Baranda, a Mexican poet and award-winning translator of modern poetry, and U.S. poet Paul Hoover, who is a professor of Creative Writing at San Francisco State University and editor of a literary magazine.

We loved these poems and occasionally compared them to another version in English that has been much-read over the last half-century: the translations of Roy Campbell that first appeared in 1951 and were republished in a popular Penguin Books paperback. In contrast to Campbell and others, Baranda and Hoover opt for “the plain sense of the imagery” when making translation decisions, rather than inventing images or words to support a rhyme.

For example, their retaining of Juan’s language of God as Verb leaves Juan accessible to more than Christians, who usually see Juan’s Spanish “Verbo” translated as “the Word.” Keeping Juan’s understanding of the Divine Verb reminded us of Rabbi David Cooper from three decades ago who wrote about the same quality of God, as active and changing. We reviewed Cooper’s God Is a Verb in 1998.

Here are two more specific examples from Baranda and Hoover’s translations. The first is from the poem, “Song of the Soul that Rejoices in the Knowledge of God through Faith”:

“How well I know the foundation that springs forth and flows,
even though it is night.

“That eternal fountain is hidden,
how well I know where it has its home,
even though it is night.”

“When you gazed at me,
your eyes impressed your grace in me;
because you loved me,
and my eyes deserved
to adore what they saw in you.” 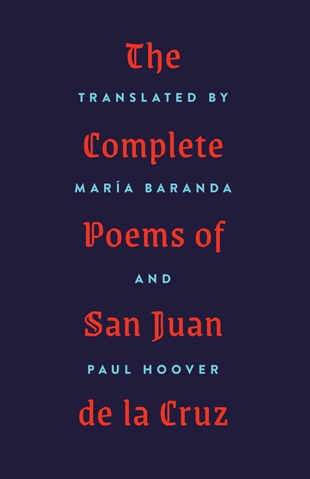