By Alice Faye Duncan
The quest for freedom, seen through the eyes of the leader of the movement to make Juneteenth a federal holiday.

Alice Faye Duncan is a National Board Educator who writes books for young learners, speaks to students about the Civil Rights Movement, and leads writing workshops. Her new book, Opal Lee and What It Means to Be Free, tells the story of the “Grandmother of Juneteenth,” who collected more than 1.5 million signatures between 2016 and 2020 for her petition to the U.S. Congress to make June 19th a federal holiday that commemorates the end of slavery in the United States. In June 2021, when Opal Lee was 94 years old, President Joe Biden signed legislation that made her dream a reality.

In the story, we are introduced to Opal Lee at a lively Juneteenth party complete with a choir, fiddle players, and "picnic tables covered with platters of barbecue, baked beans, tomato tarts, and raspberry cobbler." Under a large shade tree, Opal Lee holds court with a circle of children who lovingly call her "Great-Grand Dear."

She tells them tales dating back to her Granddaddy Zack, the son of an enslaved mother, who taught her that "once upon a blazing sun, Black bodies were bought and sold like cattle." Even when President Lincoln signed the Emancipation Proclamation, "White masters defied his words" in faraway Texas ... until June 19, 1965, when the Union army marched through Galveston and declared that "all slaves are free." Opal Lee tells the gathered children that this liberation was a day of jubilee and that Juneteenth "is bigger than Texas, singing, or dancing bands. Juneteenth is freedom rising, and freedom is for everyone."

She speaks of both the glory and the heartache of the ensuing years, telling the children that "some memories are chocolate sweet. But some memories cut and bruise" — like June 19, 1939, when an angry mob burned down her family's new home. She speaks of freedom as a gold coin; "struggle makes it shine."

Keturah A. Bobo, a New York Times bestselling illustrator and entrepreneur, specializes in work uplifting and shining light on those who are far too often underrepresented. Her paintings for Opal Lee, while honestly representing sufferings endured, exude love and solidarity. 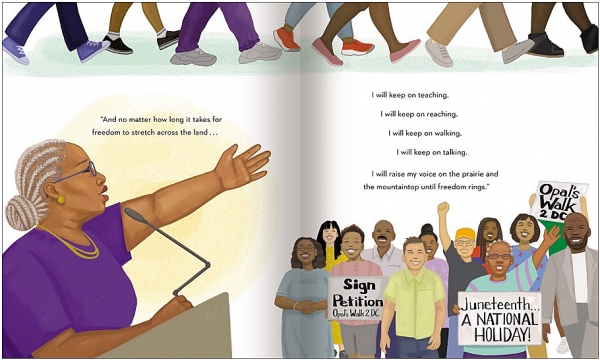 The book closes with a recipe for Juneteenth Strawberry Lemonade, a timeline stretching from 1619 to 2021, a page-long biography of Opal Lee, and a list of sources. The recommended reading ages are four to eight years old. 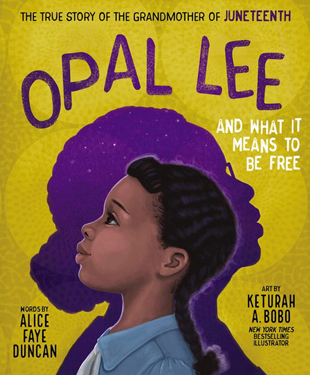