By Dawn Casey
An honest, wise, and reverent book about interspecies relationship.

Drawn from an Inuit folktale, this book has been dedicated by the illustrator, Amanda Hall, "to the future of the magnificent white bear and its habitat." A portion of the royalties go to Polar Bears International, helping to protect this vulnerable species.

Inuit author Kelly Berthelsen writes a foreword from Greenland about the importance of stories for passing down human wisdom and knowledge of the land, the animals, and history of Inuit families and communities. "In the spiritual world of the Inuit," she writes, "all beings — both living and nonliving — have souls that deserve the same respect and treatment." She beautifully sums up the spiritual practice of reverence that's at the heart of Little Bear.

By way of disambiguation, the book is different from Maurice Sendak's classic series of Little Bear early readers. Bears in western stories are often depicted with human characteristics: think of Paddington and Pooh; Sendak's are no exception.

In Dawn Casey's retelling for children ages four through eight, this folktale's Little Bear is discovered as a wild, lost, frightened creature, who gets taken into the care of a lonely of a lonely old woman. From the moment she adopts him, she carries him everywhere in her hood, like a child, and he is loved by the village children, giving the old woman a further gateway into the relationships she longs for.

As the bear grows, though, the people of the village acknowledge the bear's ursine nature and bring it along hunting with them, catching salmon and seals. Amanda Hall's illustrations make it clear all along that while this bear can be adorable — curled up in a lap or sliding down a snowy hill — it has claws and its own wild essence to be respected.

When hunters from another village see Little Bear for the first time, they know nothing of his friendship with the old woman and her community. It is only when these others pierce him with a spear that the bear's human friends realize they must let him go. Without giving spoilers, we can say that the book continues beyond that sad moment and comes to a believable ending that includes a special way for the woman to remain in communion with the bear.

Kelly Berthelsen offers this blessing, which we pass along to you: "May you enjoy this story of love and respect between human beings and animals." 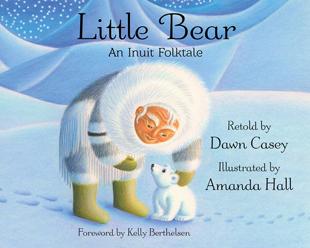