By Laura Gehl
A tale about the power of unusual friendships.

This year, spongy moth caterpillars ravenously visited our region of upstate New York. For humans who love the woods, it was heartbreaking: What sounded like unmitigated rain was a confetti of falling leaf pieces. The oak in our front yard got especially hard hit, but it has grown new foliage since then, and we're hopeful that it will be fine. I wonder whether its nearest neighbor, a tulip poplar, has been helping and encouraging it to recover.

Science has now shown that trees have their own "World Wide Web" of shared support and defense (see, for instance, this review of The Wisdom of Trees). Laura Gehl, whose nearly two dozen children's books are included on many best-of-the-year lists, gives us a child-scale story of this kind of unusual friendship in Apple and Magnolia. It includes not only the two trees mentioned in the title, but also a girl named Britta, who adores them.

Britta sees what most of her family can't: that the two trees are best friends ("deep down in her heart, she knew it was true"), that Apple gives Magnolia gifts, and that Magnolia waves at Apple. Her father remains skeptical; her older sister considers Britta's perceptions ridiculous. But her grandmother, Nana, says, "unusual friendships can be most powerful of all."

This power of friendship becomes especially important when Magnolia's branches start drooping and her leaves turn brown instead of yellow. The book centers on Britta's faith that Magnolia will survive, her compassionate attempts to help, and her certainty that Apple is also helping.

Illustrator Patricia Metola, whose work has been showcased by the Bologna Children's Book Fair on several occasions, brings a delightful crayon-like innocence to her sophisticated skill with color schemes, layout, and transmission of feelings. In one illustration, for instance, Britta sits near the top of the page, avidly knitting a very long scarf to keep Magnolia warm. It tumbles in swirls right down beyond the bottom of the page, while Britta's cat rolls upside-down in the curliques of unknit yarn, the dog belly-up in solidarity beside her. It's amusing, touching, and perfectly balanced.

In times when we need as much hope and faith as we can muster to care for trees and other living creatures, Apple and Magnolia stands out as a loving way to convey to three-to-seven year olds that unusual friendships have the power to see us through. 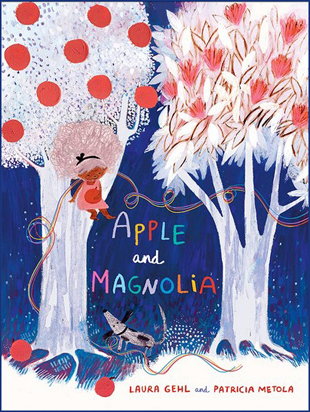 The Wisdom of Trees