By Lita Judge
Poetry and the latest scientific research about trees' communication and cooperation.

To nature mystics, it's no surprise that trees communicate and cooperate with each other, forming their own community in harmony with other beings. But in the world of science, the intricacies of trees' interrelationships have been breaking news in recent years. Through poetry, fascinating facts, and diagrams and paintings that reflect a lifelong interest in nature, The Wisdom of Trees brings the latest research to life for seven to 12 year olds.

What child could fail to be drawn in by an opening page titled "A Secret Kingdom" and proclaiming that nature exists communally?

I am a single beech,
but I am not alone.

Pointing out that "trees live longer when they help and defend one another," the book goes on to speak of the "Wood Wide Web," a nickname that scientists give to the way trees can instant-message one another through secret codes that travel along fungi living around their roots. In this symbiotic relationship, the trees share up a third of their food with the fungi. They also use the fungal network to share their nutrients with saplings who are too small to get enough sunlight, favoring their own "kin" by sending more food to them than to unrelated saplings.

And that's not the only way that trees speak to each other. Umbrella thorn acacia tress in Africa, for instance, pump tannins into their leaves when a giraffe starts munching them, giving the giraffe a stomach ache so that it moves on. But the acacia also releases ethylene gas that travels to other acacia trees within 300 feet so that they can release their own tannins before the giraffe arrives.

This book is full of such examples. In addition to tree communication, it covers trees' influence on climate, their provision of food and habitat for wildlife, their ways of telling time, and much more. Every section begins with a poem (see excerpt) and has follow-up notes near the back of the book for those who want to know more. The book closes with suggestions for helping forests, a glossary, sources, and good websites for further information.

The author and artist, Lita Judge, lives with her husband in a red house in the middle of a New Hampshire wood, visited by deer, bear, and bobcats. She has written and illustrated 30 fiction and nonfiction books, receiving the International Reading Association Children’s Book Award, an ALA Notable, NCTE Notable Book, a Kirkus Best Book, and the Jane Addams Honor. She credits a thousand-year-old oak near a medieval English Castle with helping her realize that she has worthwhile tales to tell. 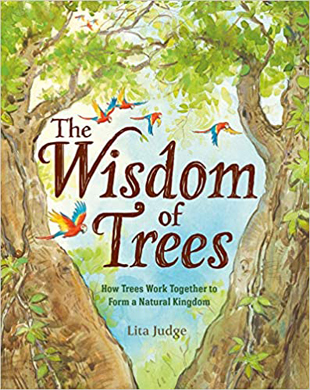