Practice of the Presence A Revolutionary Translation by Carmen Acevedo Butcher

By Brother Lawrence of the Resurrection, Nicolas Herman, Carmen Acevedo Butcher
Loving God in the simplest, most ordinary ways.

S&P's Contributing Editor, Jon M. Sweeney, had an “Off the Page" conversation with Carmen Acevedo Butcher about “Practice of the Presence" on September 21, 2022. Watch the video below.

A fresh translation of one of the classic works of Christian spirituality takes up two-thirds of this book. Practice of the Presence, as Carmen Butcher accurately renders the title from the French, is most often translated into English as The Practice of the Presence of God — so you may be familiar with this work from other books by that other name.

There are many editions available, but this will likely now become the standard. Butcher places Brother Lawrence and his way of prayer at its proper place as head of the modern Christian spirituality movement.

He is known entirely through the simple way of faith and knowing God that’s relayed here. Before becoming a lay (not ordained) Carmelite monk — a “brother” — his name was Nicolas Herman. He lived in Paris in the 17th century and had little education, becoming a soldier and then a domestic servant. At 26, inspired by an uncle’s example and experience, Nicolas sought to join a Carmelite religious order. Soon, as a monk with the new name of Brother Lawrence of the Resurrection, he was put to work in the kitchen — work that he didn’t always enjoy. It was perhaps ironic, then, that despite his lack of both education and clerical status, it was Lawrence whom monastery visitors often came to see.

His book was not written by him so much as it was compiled from his scraps of writing and written about him after his death. A priest pulled together maxims of Lawrence, letters written by Lawrence, and conversations had with Lawrence, and published this work for the first time.

The translator is perceptive and informative with her introductions and appendices, which take up the other third of this volume and are essential for anyone interested in knowing about Brother Lawrence, the history of Christian spirituality, and the importance of this text.

For example, although Lawrence didn’t love working in the kitchen, where he was working did not matter much. He found an inner peace and gentleness that was enviable by anyone who watched him going about his day. Lawrence showed how to be in the presence of God no matter what we’re doing.

He offered people simple ways to become “Love’s friends,” which is how he sometimes referred to the Divine and those who became aware of the Divine in and around them. To Lawrence, prayer was a kind of “loving awareness.” (See an example of this teaching in the excerpt accompanying this review.)

The Practice of the Presence was to introduce an entirely new way of prayer that anyone could do. Quoting Carmelites today who stand in this tradition, Carmen Butcher refers to it as “the methodless method.” It is also, simply put, practicing presence wherever you are and whatever you are doing.

You perhaps can’t imagine how radical it was for a monk then to tell non-monks how easy it was to find God. It was more common for monks and priests to say that they were the possessors of the true or real path and that those on the outside were comparatively flying blind.

But not Lawrence. He taught those pilgrims who came to see him, and through his writings after his death, he continues to teach all of us: “When we practice the presence, we enjoy and become familiar with God’s divine company, speaking humbly and looking to them lovingly for support all the time, at every moment, without methods of limits, especially during times of temptation, pain, loneliness, exhaustion, and even disbelief and stumbling.”

According to Lawrence, for those who learn from his example, every action can become “a kind of brief conversation with God.” It is important, he said, to be deliberate and thoughtful, unhurried, gentle and loving — even and especially with the pots and pans in the kitchen (the mundane, ordinary, real stuff of life).

Butcher is very good at demonstrating the power of Lawrence’s work and life in the history of spirituality, for instance, quoting Black theologian Howard Thurman to show the impact of practicing the presence on more recent teachers: “There is in you something that waits and listens for the sound of the genuine in yourself.” It is that something, or divine presence, that Brother Lawrence found and practiced so simply and consistently. 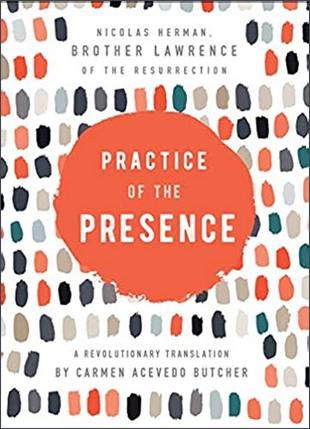