I Love You, Blue

By Barroux
Encouragement to care for the oceans and all their creatures.

Spare in words, I Love You, Blue conveys the practice of reverence: the spiritual path of radical respect, courtesy, civility, awe, and amazement that arises from a grand mystery. It begins with boy in a motor boat not much larger than he is, navigating the seas and telling us, "I love the blue of the ocean." Paris-based author and illustrator Barroux, whose internationally acclaimed books reflect his sensitivity to the problems facing people and nature, gives the water and its varied denizens two thirds of the opening spread, already building awe in the reader.

When the ocean turns gray and "roars and rages," the boat is no match for it. Now the churning water fills nearly the entire page. In a tiny strip at the top, the boy — watching his boat sink beneath him — calls out, "Mayday! Mayday! Can anyone help?"

And who should come along to save the boy and his boat but an enormous whale? Drawn with endearing simplicity, this new friend accepts the name "Blue" from the boy, who hopes to see his new friend again.

When Blue disappears, the boy — concerned for his friend's welfare — manages to find him and help relieve him of a "belly full of bags." At this point Barroux takes children from identifying with the boy and worrying about the whale to seeing and responding to a larger picture of the devastation caused by plastic in the world's oceans.

Written for three to seven year olds, the story itself gives a simple and imaginary solution, on the scale of what a child's psyche can handle to maintain hope. The closing flyleaf, though, gives more in-depth information for older children, caregivers, and teachers. "Even plastics thrown away far from any beach can end up in the ocean," Barroux explains, "which means that many people endanger whales like Blue without realizing it."

He offers five ways for everyone to help — including drinking from reusable containers instead of plastic bottles and organizing a plastic collection day with family and friends — and organizations to join in order to learn more:

* Whale and Dolphin Conservation (WDC) with their dedicated Kidzone;

The book's combination of charm, affection, conscience, and practical activism make it one that deserves a place in every young child's library. 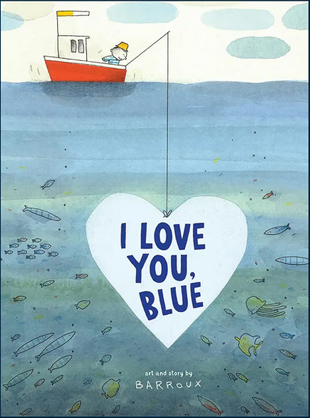