By Chad Otis
A spotlight on individual talents and a helpful spirit.

In the spirit of The Little Engine That Could and Tacky the Penguin, this ferry tale takes us to "a place with more water than land" where a patient, careful, always-on-time little ferry boat wishes that she was as fearless, thundery, or graceful as the larger boats surrounding her. Wanting to gain the admiration and cheers of human fans, she tries to race as fast as Speedboat, glide as elegantly as Sailboat, and push as fiercely as tugboat. But she discovers to her dismay that she just wasn't made for these tasks.

Her moment comes when a fire endangers animals living on an island. When the other boats attempting to rescue the animals instead frighten them and can't get close to shore, Little Ferry hopes she can help and knows she needs to try.

Chad Otis enhances his story with bright, collage-like pictures in which a simple shift of position of eyes and brows can mean the difference between uncertainty and enthusiasm. We especially liked the way that a moose shyly hides behind Little Ferry's cabin and provides a safe perch on one antler for a squirrel — a detail that shows Otis' care for the nature of each character.

Like many of the fairy tales to which its pun of a title alludes, A Little Ferry Tale underscores that transformation from self-doubt to self-esteem most often happens when we take the focus off ourselves. Designed for readers ages four to eight, it will particularly appeal to children learning to trust that their own gifts match what the world needs. 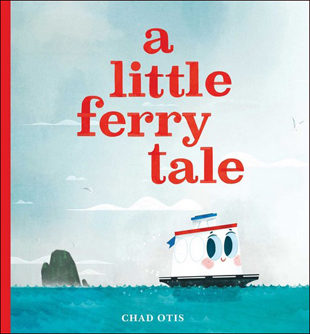