Philip Kapleau was the first Westerner to be ordained as a roshi. He is the author of five books including the classic The Three Pillars of Zen. This paperback edited by Rafe Martin contains previously unpublished Zen talks given over the past 25 years at the Rochester (New York) Zen Center.

Koans, the unique creative legacy of Chinese Zen, are a form of spiritual practice that has been used, according to Kapleau, "to help Zen students realize, refine, and embody the Buddha's teachings. Literally they are often the baffling verbal expressions, puzzling or frustrating to logic." They are also seen as vehicles designed "to awaken one's own sleeping buddha heart and mind and to liberate them to work for the welfare of others."

In Straight to the Heart of Zen, Kapleau accesses the inner meanings of three koans drawn from the life of the Buddha, three koans from three great sages in Zen, and five traditional koans of special interest to contemporary seekers. Wrestling with these conundrums, we're forced to use our emotions and intuition to access their teachings. Again and again, koans pull us away from our fixed ideas and attachment to intellect and knowledge. Along the way, Kapleau offers wise commentary on emptiness, joy, practice, nonduality, silence, and student-teacher relationships. What a treat to have these eleven classic koans opened up for us by this Zen master! 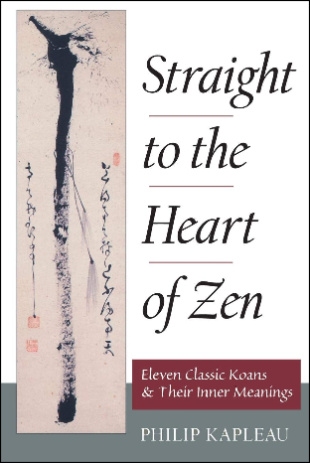